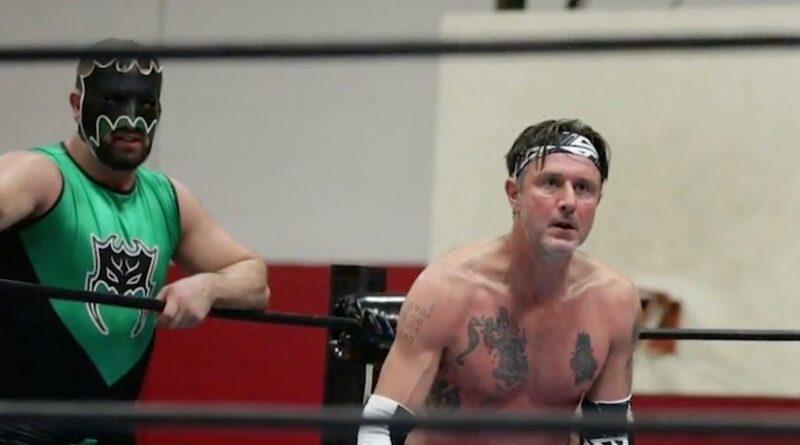 David Arquette made his name in the mid-90s after appearing in slasher horror franchise Scream and a host of other teen-friendly flicks.

The US actor went on to become half of one of the biggest couples in Hollywood when he married Friends star Courteney Cox.

The couple later split but have continued to work together through their joint production company.

Away from the big screen, Arquette has also ventured into the world of professional wrestling.

He won the World Championship Wrestling (WCW) heavyweight championship during a comic storyline when the entertainment form was at its modern peak in terms of audience numbers.

With Arquette turning 51 on Thursday September 8, the Star looks back at his side-line as a wrestler and marriage to Cox.

WCW was in the middle of its ratings war with rival franchise WWF (then the World Wrestling Federation, now known as World Wrestling Entertainment or WWE) in 2000 when its bosses came up with the idea of Arquette, a wrestling fan, winning the company’s top belt.

Despite not being a wrestler at the time, he held the heavyweight title for 12 days, with his time as champion mainly used for comic effect.

But after taking flack from wrestling fans for almost two decades, he decided to take up wrestling properly, taking to the independent circuit in 2018 to prove he was “not a joke anymore”.

As part of his in-ring career, the Never Been Kissed actor agreed to a brutal “death match” in November 2018 against wrestler Nick Gage during a bout where weapons were allowed to be used.

During the match, Gage attacked him with a pizza cutter, sent him through a table and smashed a glass lighting tube across his head.

Following the lighting tube strike, Arquette suffered a severe cut in the neck, causing him to bleed profusely and requiring hospital treatment.

The incident saw him lash out at Gage. The 51-year-old later said he had an agreement with Gage over not cutting him in order to protect his acting career.

Arquette told Vice TV afterwards: “The next day I was… still pissed because things just got out of control.

“I was in over my head and I shouldn’t have been there. But until you’re in a death match., you don’t know what a crazy deathmatch is.”

Why did David Arquette and Courteney Cox get divorced?

The two actors got together after meeting on the set of the first Scream movie in 1996 and would go on to get married three years later.

But the high-profile union did not last, with the pair separating in 2010 and then officially divorcing in 2013.

Cox, 58, blamed the split on them being different characters but also alluded to David’s high sex drive being a factor.

The Cougar Town star told the Howard Stern show in 2011: “[It] is one of our problems in our relationship.

“Whenever I would need consoling from David, he could not literally put his arm around me for one second without completely getting a boner.”

She also said she is a “homebody” where as, even though David is sober, he is a “very gregarious guy, he’s very outgoing” and she did not want to “inhibit him in his life”.

The break-up was not mutual, however, with Arquette announcing he had “begged” Cox to take him back before their divorce was finalised.

His ex-wife has been dating Scotsman and Snow Patrol singer Johnny McDaid since late 2013.

She shares one child with ex-husband David. Coco Arquette was born in 2004 and her godmother is her mother’s Friends co-star Jennifer Aniston.