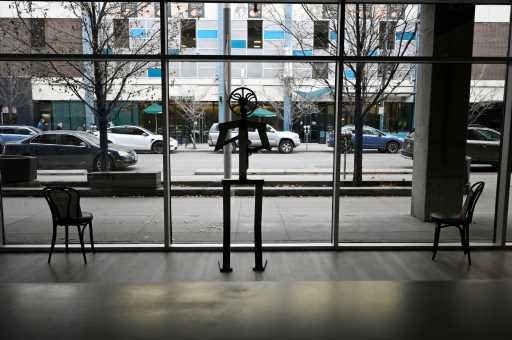 The 5 1/2-foot tall sculpture, which depicts a steely, abstract figure playing a saxophone, is the only full-time resident at Dazzle Jazz’s new location. The owners of the 25-year-old Denver club in August said they would decamp from the historic Baur’s Building to the Denver Performing Arts Complex, about two blocks northwest of Baur’s in downtown Denver, to cut soaring costs.

Foot traffic has not returned to downtown the way it needs to, co-owner Donald Rossa said, and rent and maintenance at the current Baur’s space averages about $400 per hour.

“We thought 2020 was the year that Dazzle was finally going to make money,” co-owner Matt Ruff said in August. “That didn’t happen.”

The new space is coming along nicely, if slowly. The location doesn’t yet match its sleek renderings, and Mr. Saxy is the only visible tenant. A fundraiser brought him into the new space, on the corner of 14th and Arapahoe streets at the former Onyx nightclub. He’s waiting on permits for construction workers and other craftspeople — and eventually audiences and artists — to rejoin him.

“We are still booking and selling tickets regardless of when the opening date is, and we’ve left a couple different spots in the calendar open for the grand opening, where we can put in some special shows,” said Kelley Dawkins, Dazzle’s marketing director, during a Dec. 15 walkthrough of the space. She said Dazzle is set to open sometime in the first quarter of 2023.

Leading with the circular, understated logo from by Denver’s ArtHouse Design, the new Dazzle features architecture by Perkins+Will and is being built by Loomis Improvements Inc. The layout is designed in some ways to mimic the two-room format of its former Capitol Hill location, with the stage on the right side (when walking in from the street) and a 10-seat bar and lounge area on the left, according to the architectural renderings.

As Dawkins showed off the room, she stopped to regard Mr. Saxy’s stance facing the floor-to-ceiling window along 14th Street, silently wailing as pedestrians and cars stream through the Denver Theater District, as the area is called. His home currently lacks the signifiers of a club — the comfy seats, the fixtures and design elements that leap out from concept images. Window wraps that bleed in a subtle gradient from red to blue will echo Dazzle’s new logo, Dawkins said, and eventually cover up Mr. Saxy’s current view.

Dazzle’s new space is homier than its current one, and staff want to make sure it looks that way upon first entering. On the right side is a Listen More wall, which contains slots for three dozen vinyl LPs that can be borrowed and returned and replaced with new donations (by trusted folks, of course) as with a Little Free Library. A clear plastic crate of additional records, spanning 1940s big band to ’70s free jazz, sits on a side table. Wires and heating ducts hang down from the open ceiling. A hand-written sign in purple marker, taped to the long bar, reads: “$5,000??? Sponsor this artwork… it’s still under construction. Talk to Donald.”

Dazzle is also selling $1,000 per-chair sponsorships to raise funds for the space’s renovation. Ruff said its new lease will cost “about a third of our current one” and run for nine years with the city.

“Baur’s feels very cavernous and this will be more intimate,” Ruff told The Denver Post. “Although for the first time, we’ll have a completely unobstructed view of the stage, which is amazing.”

Dazzle has recommitted to supporting diverse local artists during the pandemic, holding a series of community discussions about race (viewable on its YouTube channel at youtube.com/c/dazzlejazzdenver) while trying to lift up its non-white performers; creating a food pantry for local artists; and continuing to pay artists what they’re worth, despite a near-total loss of revenue in the first months of COVID.

“In terms of ticket sales, they almost all go to supporting the musicians, while food and beverage sales support the venue,” Dawkins said. That’s in contrast to some payment models where bands playing independent venues get a cut of the bar sales. “We have a higher ticket price than most bars, so they get that percentage, and then when they help bring in even more people, it’s good for everybody.”

Perhaps, but when some Dazzle shows run $15-$20 per ticket, as Sarah Mount and the Rushmore’s Dec. 30 concert does, it’s a refreshing alternative to $150 (or higher) ticket prices for concerts at Ball Arena and Red Rocks Amphitheatre.

Dazzle’s mix of impressive national and local names, including late, Colorado-based Grammy winner Ron Miles, anchors it to the city’s jazz history. Dazzle favorite Ken Walker Sextet is led by the former house bassist for El Chapultepec, the sorely missed jazz institution in Lower Downtown that closed during the pandemic. He was the first monthly act Dazzle ever booked, and still plays there monthly. Purnell Steen, of Denver’s Le Jazz Machine and the Five Points Ambassadors, has also been playing Dazzle for decades.

“We don’t want to lose that,” Dawkins said as she entered the new space’s tidy green room, which is already adorned with the black-marker signatures of musicians who have played private fundraisers at the space. “It’s hard to bring your entire history with you.”

At least, by the time spring arrives, Mr. Saxy will no longer be lonely.