In the past, Céline Dion has leant her vocals to several soundtracks, including Beauty and the Beast and Titanic—and now, she’s going balls to the walls for Deadpool 2. “Over the years I’ve received incredible songs and I’ve been involved in fun projects. ‘Ashes’ is 1 of those songs and @deadpoolmovie is off-the-charts!” the 50-year-old entertainer tweeted. “Take the most insane ride of your life when it opens on 5/18! You’ll be laughing your ‘ashes’ off! — Céline xx.”

The video shows Dion center stage, belting her heart out to an empty theater, all while the Merc With a Mouth himself—a.k.a. Deadpool (Ryan Reynolds)—dances around her in heels! The video was filmed in The Colosseum at Caesars Palace, home of Dion’s Las Vegas residency. David Leitch directed the clip, which ends with a minor disagreement between its two stars. “Céline! That was amazing! That was the most beautiful performance I’ve ever seen in my life. Thank you! We need to do it again. It’s too good, and this Deadpool 2, not Titanic. You’re at like an 11,” Deadpool argues. “We need to get you down to a 5, 5 and a half, tops. Just phone it in!”

Quips Deadpool, “God, I should have asked ‘N Sync.” 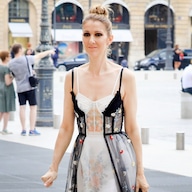 Like “Ashes,” “Welcome to the Party” was written exclusively for the movie.