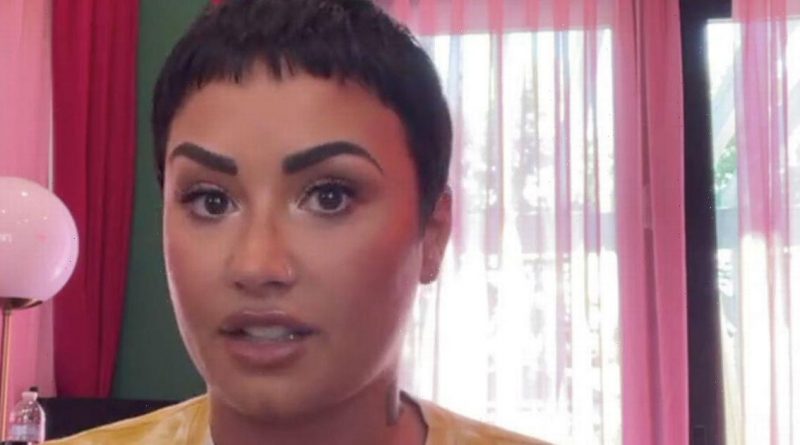 Demi Lovato has hit back against fans – and Piers Morgan – after an ice-cool tirade about a frozen yoghurt shop landed her in hot water.

The former Disney star faced backlash when she admitted it was "difficult to order" at the froyo store, adding that the visit was "triggering and awful".

Among those complaining was ex-Good Morning Britain presenter Piers Morgan, who branded her "stupendously dumb" for the rant.

Piers claimed she was attempting to 'attack' the small business, which he has visited "many" times.

He wrote in his Mail on Sunday column: "I was triggered by Ms Lovato herself.

"The more this repulsively arrogant woman attacked this lovely little store in her staggeringly unhinged and delusional manner, the more furious I became."

Popping into The Bigg Chill in Los Angeles, Demi said that the "diet foods" and sugar-free options on offer made it extremely difficult for someone with an eating disorder to cope.

She introduced the divisive hashtag #DietCultureVultures, adding: "So, I think I’m gonna have to make that hashtag a thing. I will be calling harmful messages from brands or companies that perpetuate a society that not only enables but praises disordered eating."

However, the shop responded to Demi on social media to explain that they cater for people with diabetes, Celic disease and people who follow a vegan diet.

But Demi insisted they need to "do better" and "find a way to provide an inviting environment for all people with different needs. Including eating disorders."

The Dancing with the Devil singer has been candid about her struggles with body image and bulimia.

Demi has since hit back on social media, insisting that her initial "message has gotten misconstrued."

She explained in a video posted to Instagram: "When I messaged this froyo place, originally I wanted to make a point, and I wanted to call out behaviours or branding things that didn’t sit right with me.

"As someone who deals with an eating disorder and is in recovery from an eating disorder, I still to this day have a hard time walking into a froyo shop, ordering yogurt and being content with it and keeping it down."

She continued: "I know that seems like not a huge deal to a lot of people, but to me it is."

"I didn’t know that. Because it wasn't clear, I definitely jumped to conclusions and probably shouldn't have gone about this the way that I have, but I'm willing to talk to this froyo shop to help get the messaging right."

Demi admitted frozen yoghurt "felt safe" to her while struggling with her eating disorder, adding: "I know that people struggle with froyo with eating disorders. That's why I'm super sensitive when I walk into a froyo place and I see diet stuff."

And comparing it to her struggles with drug addiction, Demi said: "This is a hard thing to live with on a daily basis.

"The thing about overcoming my addictions, my drug addictions, I can walk away from that and never touch it again for the rest of my life. I don't ever have to do that. But I have to eat three times a day.

"This is something that will be with me for the rest of my life.

"I left that yogurt store and didn't get the yogurt that I wanted. And then I had a hard time the rest of the weekend, to be totally transparent."

The 28-year-old singer has been open about her drug misuse, and sang about her overdose and subsequent recovery on her latest album.

She insisted she doesn’t want to harm the reputation of a small business "as someone with a lot of followers", but that she "walked into a situation that didn’t sit right with me".

"My intuition said speak up about this, so I did. And I feel good about that.

"What I don't feel good about is some of the way it's been interpreted and how the message has gotten misconstrued."

Demi said she’d be up for giving the shop some pointers "to help align the messaging to where I feel safe going in there and I can eat the froyo that I went there for."

The star added: "People with eating disorders should be able to go in and feel safe wherever they go to eat. That's all I'm asking. Literally all I'm asking.

"If we can make this environment safer for everyone, including people that are in recovery from an eating disorder and just want a little froyo, if we can do that while also giving froyo to vegans and people with diabetes, let's go."

"I'm genuinely sorry that people took it the wrong way. I just get really passionate," she added.