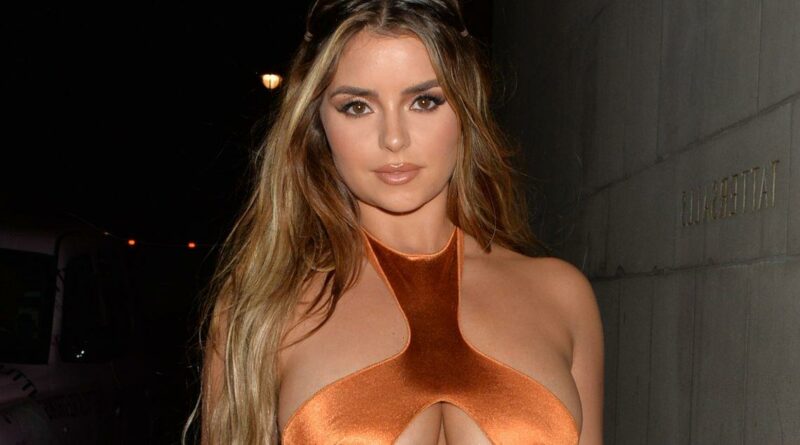 Demi Rose stunned onlookers in a revealing outfit at the launch of her new range with PrettyLittleThing.

The model stepped out in a satin style burnt orange dress that hugged every inch of her famous curves.

The racy cut-out number, which showed off her toned tummy and hips, was paired with a set of embellished heels and a matching orange bag.

Demi’s brunette locks fell effortlessly down to her waist as she kept her makeup minimal leaving her sexy outfit do all the talking.

Also making an appearance at the event held at Zuma London was Love Island star Sharon Gaffka, who looked just as stylish in a pale blue co-ord.

The star-studded get together was in honour of the influencer’s new fashion line with the brand which promises to enhance your shape with a variety of figure-hugging styles.

Just before the launch PrettyLittleThing said: “Whatever your plans this summer, this edit is anything but understated and guaranteed to make you look unforgettable.”

In a separate post, which was accompanied with images from the collection, they added: "PrettyLittleThing @DemiRoseMawby Edit is here. Get ready to serve up nothing but body-ody-ody."

However they quickly faced backlash from a number of critics who were less than pleased with the campaign pics.

In response, one person said: "The model is stunning. However, we need women with real bodies please."

A second said: “How many women in real life do you know that looks anything like her??? Who exactly are ur target audience ? Cos it can’t be women with actual real bodies.”

Speaking to the Manchester Evening News, a spokesperson for PrettyLittleThing said: "PLT is a brand which celebrates all women and body inclusivity and we are really proud to represent #everyBODYinPLT.

"We work hard to promote this message with a diverse range of talent and influencers."

The 26-year-old from Birmingham, who has been no stranger to controversy, recently shared that her career is a "blessing" after being bullied during her childhood.

In an interview with Radio 1 Newsbeat, she said: "I always wanted to get into modelling and when I eventually got there I classed it as a blessing because I grew up being bullied and didn't have many friends at all."