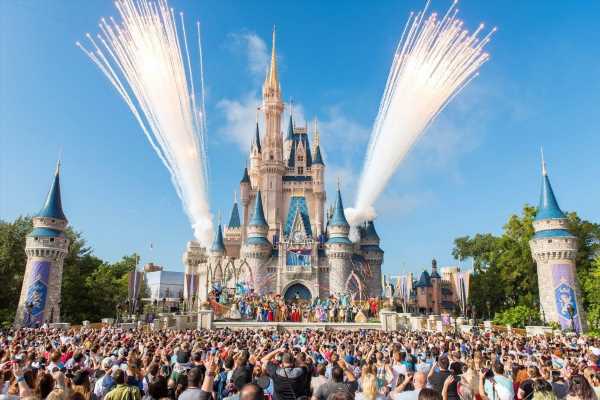 If you’re a Disney fan, you probably have a favorite song from a Disney movie or television series. But if you’re a Disney super fan, you also have a favorite tune from one of the line queue in the parks. Both Disney World and the Disneyland Resort play some of the most magical musical arrangements. This is to immerse guests into another world as they’re waiting in line for rides or wandering through the parks. Now, Disney lovers can stream their favorite ride queue music for free.

Disney queue lines have some of the best music

For some people, it’s the audio loop and the smell of musk as they enter Pirates of the Caribbean. For others, it’s the eerie sounds and creepy imagery within the gates of the Haunted Mansion. Other Disney lovers enjoy the area loops, or the music that plays in a particular area of the park, like Frontierland or Fantasyland.

People treasure the soundtracks from Disney attractions, including the line queue music, because of the nostalgia they evoke. Now, there’s an easy way Disney fans can listen to line queue music without stepping foot in a Disney park.

Where to stream the ‘Sounds of Disney’ podcast

The Sounds of Disney podcast has over 80 episodes featuring music from Disney parks, rides, hotels, and other attractions. Dubbed “your source for fully immersive, three-dimensional audio from the Disney Parks,” the Sounds of Disney podcast promises to take listeners on an audio journey through the “wonderful sounds only found inside the Disney theme parks and resorts.” With episodes like “Main Street Halloween,” “The Land Pavilion,” “Crystal Palace,” and “Pandora,” you’ll find Disney sounds for all tastes on the podcast.

According to All Ears, the music that plays throughout the Disney Parks is carefully curated by Imagineers. First and foremost, the music needs to be appropriate depending on where it’s playing. After all — it wouldn’t make sense to hear German Oompah music in the Norway Pavilion of EPCOT.

With a focus on the theme of the ride or area of the park, Imagineers carefully curate a playlist of songs that are upbeat, welcoming, and able to put a smile on guests’ faces.

For example, the highly specialized music heard in the Tomorrowland section of Disney World is mostly the sound of synthesizers. As All Ears points out, very few (if any) “traditional” instruments are heard in these recordings. If you listen closely, you might even be able to hear “Strange Things” from the Disney/Pixar 1995 movie Toy Story.

Of course, “A Great Big Beautiful Tomorrow” and “Now Is the Time” from the Carousel of Progress also play throughout the landscape of Tomorrowland.