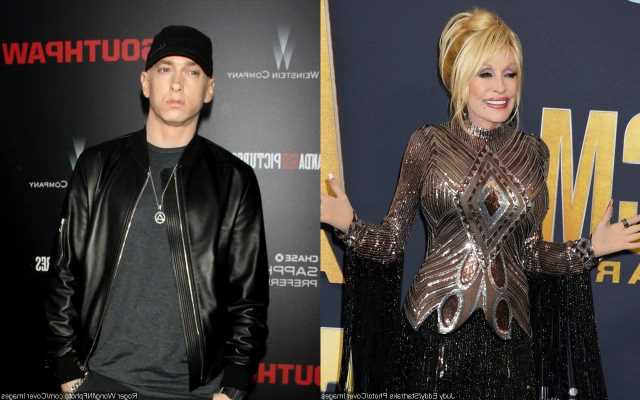 The annual ceremony took place on Saturday, November 5, at Microsoft Theater in Los Angeles, California. During the special night, Dolly, who had originally asked the Rock Hall to withdraw her nomination, unleashed her inner rock star by performing a new rock song, “Rockin’ “.

Another artist who was inducted at the event was Eminem. After being inducted by longtime collaborator Dr. Dre and performing some of his most popular songs with Steven Tyler and Ed Sheeran, he delivered a humble speech about hip-hop culture “that basically saved my life.”

“One…[is] that I’m a rapper, and this is the Rock & Roll Hall of Fame,” said Eminem. “And there’s only a few of us right now that have been inducted in already. Secondly, I almost died from an overdose in 2007, which kind of sucked.”

Eminem added, “And finally, I had to really fight my way through, to try and break through in this music.” The “Venom” spitter went on noting, “And I’m so honored, and I’m so grateful that I’m even able to be up here doing hip-hop music because I love it so much.”

As for Lionel, he was inducted into the Hall of Fame by Lenny Kravitz. The 73-year-old musician later played a medley that included his songs “Hello”, “All Night Long” and the Commodores’ hit, “Easy”. During his “Easy” performance, he brought out Foo Fighters‘ Dave Grohl, who joined him on guitar.

Duran Duran, in the meantime, was inducted by actor Robert Downey Jr. The band performed a handful of their biggest hits, including “Girls on Film”, “Rio” and “Ordinary World” without their guitarist Andy Taylor due to his health setback.

Unveiling the news was vocalist Simon Le Bon. When reading a letter from Andy on stage, Simon revealed that Andy was secretly diagnosed with Stage 4 metastatic prostate cancer four years ago.

For their part, Pat and Neil were inducted by Sheryl Crow. During his speech, Pat gave credit to her family. “It has been an incredible ride,” she said to his partner Neil. “To my partner and love, 43 years ago in a rehearsal studio, could you have imagined this night?”

Eurythmics joined the Rock & Roll Hall of Fame and the band celebrated their induction with a performance during the ceremony. The synth pop duo, made up of Annie Lennox and Dave Stewart, played their songs “Would I Lie to You?”, “Missionary Man” and “Sweet Dreams (Are Made of This)” after being inducted by U2 guitarist, The Edge.

Carly has also been inducted into the Rock & Roll Hall of Fame. The songwriter was originally scheduled to perform at the awards ceremony but was unable to attend the ceremony due to the recent death of her sisters. The show continued in her absence, with Sara Bareilles reading an acceptance letter written by Carly, and Olivia Rodrigo performing her hit “You’re So Vain”.

The 2022 Rock & Roll Hall of Fame Induction Ceremony will be broadcast on HBO and HBO Max on November 19 at 8 P.M. ET.