Home » Music » Dr. Dre Talks Eminem and Snoop Dogg Out of Whipping Out Their Junks at Super Bowl Show 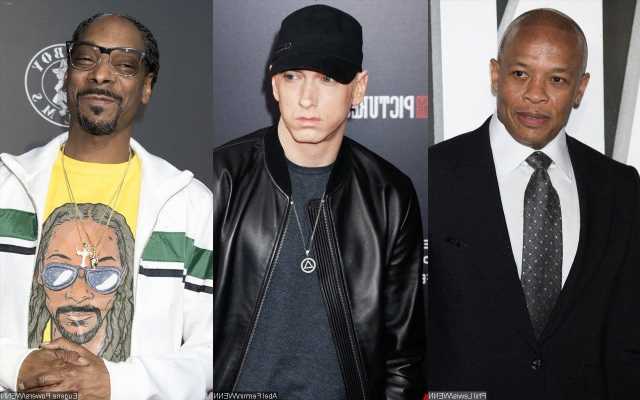 While assuring that there ‘won’t be any wardrobe malfunctions,’ Snoop teases that he may not keep his shirt on during his halftime performance with Dre, Eminem, Kendrick Lamar and Mary J. Blige.

AceShowbiz –Dr. Dre is working the best he could to keep things PG-13 for the upcoming Super Bowl halftime show. Only days away before the highly-anticipated show, the music mogul, who will headline the February 13 event with Eminem, Snoop Dogg, Kendrick Lamar and Mary J. Blige, claimed that he had to convince two of his colleagues not to pull out their penises during the performance.

“I had to talk Snoop and Eminem out of pulling their penises out,” Dre jokingly said during a press conference on Thursday, February 10. He further quipped, “It’s just actually Eminem.”

While Dre teased that there will be surprises, Eminem and Snoop assured that no indecency will be involved. “There won’t be any wardrobe malfunctions,” the “Gin & Juice” rhymer said in front of reporters.

Playing along, Eminem quipped to Snoop, “I need you to keep your shirt on, alright?” The Doggfather then jokingly replied, “I may not.”

Regardless how much skin they will show at the performance, Dre gushed about the halftime show, “The show will be f**king incredible. “He went on claiming, “Not trying to be egotistical, but who else could do this show here in LA? Who else could perform at the halftime show other than these amazing artists put together?”

Snoop previously stated that performing at the Super Bowl, which will be held at SoFi Stadium in Inglewood, California, in his home state is a “dream come true.” Nevertheless, he would not let the big stage rattle his nerves. “For me, when performing, I never let the moment get bigger than me. I’m not going to understand it until it happens,” the 50-year-old shared.

He continued explaining, “While it’s happening, I’m in the zone. I’m stuck to the script, laser focused, being on point, sounding good, looking good and feeling good. I want to give off a great presentation. After the fact, it’s when I’ll be nervous about watching it to see what the reaction is. But while I’m going through it, it’s nothing.”