Home » Music » Dwayne Johnson explains why he opened up about depression: "You're not alone"

Dwayne Johnson has revealed why he chose to open up about his experience with depression.

Earlier this year, the actor reflected on his mother’s suicide attempt, where he urged everyone to show support and compassion to those with mental health issues, and just last month, Johnson opened up once again, this time discussing his own struggle with depression.

“I reached a point where I didn’t want to do a thing or go anywhere,” he told The Express. “I was crying constantly.”

His comments soon struck a chord with his followers, he later tweeted to thank everyone who showed him support and remind them that no one is alone, and now, appearing on Lorraine today (May 25), Johnson explained why he chose to open up in the first place.

“Depression doesn’t discriminate,” he began. “And I thought that was an important part of the narrative. If I was going to share a little bit of my story of the past, it’s that regardless of who you are or what you do for a living or where you come from, it doesn’t discriminate.

“We all go through it. If I could share a little bit of it with people and if I could help somebody, I’m happy to do it.”

He added: “The key thing that I found was the most important thing about that, talking about my past in terms of depression, is the revelation and for us to be OK and embracing… especially us as guys, as men. 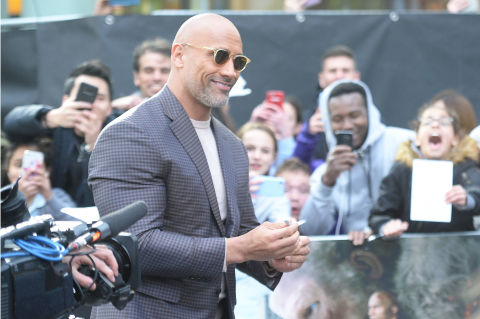 “There’s just a DNA, there’s a wiring in us and a constitution that oftentimes doesn’t let us talk about when we’re scared or vulnerable or things like that. It’s kind of like what’s been deemed as ‘toxic masculinity’.

“But no, you’ve got to talk about it and you’re not alone. I was an only child and I kept that bottled in, deep, deep. It wasn’t good, so [I’m] happy to share my story.”

Dwayne Johnson can next be seen on screen in Skyscraper, which is out in the UK and the US in July, while Lorraine continues weekdays at 8.30am on ITV.

Readers affected by the issues raised in this story are encouraged to contact Samaritans free on 116 123 (www.samaritans.org) or Mind on 0300 123 3393 (www.mind.org.uk). Readers in the US are encouraged to visit mentalhealth.gov or the American Foundation for Suicide Prevention.