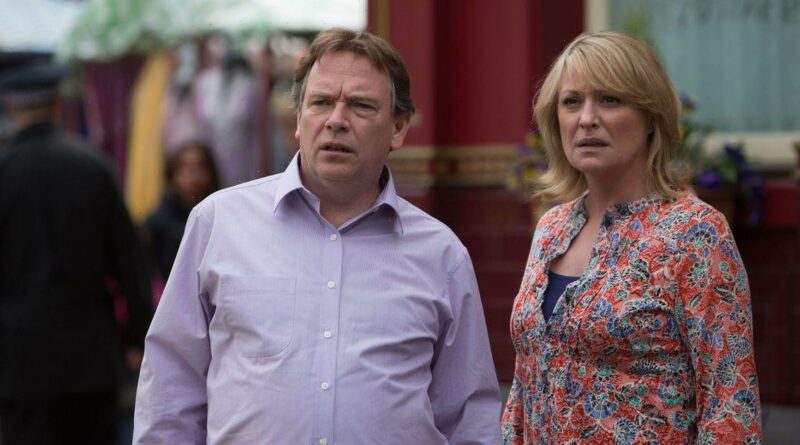 The actors, who portrayed Ian and Jane Beale on the BBC One soap respectively, are both currently starring in a touring stage adaptation of Peter James' Detective Superintendent Roy Grace novel, Looking Good Dead.

The touring run, which will cease in Coventry next month, stars the 53-year-old I'm a Celebrity… Get Me Out of Here! alum as middle-aged business executive Tom Bryce, who becomes entangled in the dark web world after innocuously picking up an USB stick and trying to trace its owner.

Laurie, 52, once again plays Adam's onscreen wife with her character Kellie, who struggles with alcohol and spending control problems.

Their onstage marriage follows the pals playing a married couple on-and-off for over ten years on screen.

While Adam had been an EastEnders mainstay since its inception in 1985, Laurie joined the cast as Jane Collins in 2004.

She later married Adam's character Ian and took on the moniker, Jane Beale.

After a rocky relationship which included a number of affairs and break-ups, Laurie's character Jane departed the soap in October 2017 when her family received threats of harm from Max Branning (Jake Wood).

Adam has been on an extended break from the BBC One soap since January last year, which fans have speculated may soon come to an end.

The actor is rumoured to be returning to Albert Square at some point in the future, with the veteran recently refusing to rule out a return to the series.

"It's not just my decision to make, it's also EastEnders. I left because of the way the storyline was going, because Ian needed to go.

"Not me going, 'I wanna leave', or them saying, 'You're going!' that was the storyline."

EastEnders airs on BBC One.