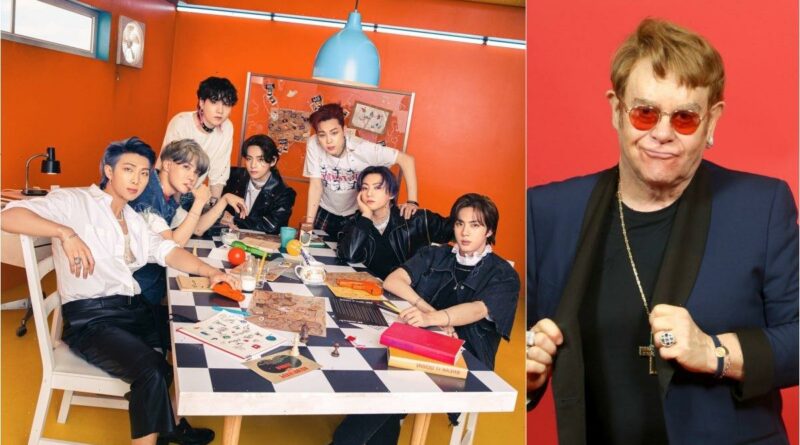 “Permission to Dance” debuted at No. 1 on the Billboard Hot 100, becoming BTS’ fifth No. 1 song on the chart. In addition to being released as a single with a music video, the song was included as an additional track on a physical CD of “Butter.”

With the song, Jin, Suga, J-Hope, RM, Jimin, V, and Jungkook encourage listeners to chase after their own happiness in an effort to bring others joy, particularly amid the ongoing coronavirus (COVID-19) pandemic.

In the first verse of “Permission to Dance,” RM references John, singing, “When it all seems like it’s wrong / Just sing along to Elton John / And to that feeling, we’re just getting started.”

On Aug. 5, RM posted a video to BTS’ shared Twitter account. In the video, RM lip-synced to his part of “Permission to Dance” that references John.

The BTS rapper proceeded to tag John in the tweet, writing, “When it all seems like it’s wrong Just sing along to @eltonofficial #PermissionToDance.”

The next day on Aug. 6, John responded with a video of his own. On Twitter, John posted a video of himself singing the next line of “Permission to Dance.” He included the lyrics in his caption of the video and proceeded to tag the Korean band.

“Thanks, BTS. Love to the ARMY,” John said at the end of the video.

What is the Permission to Dance Challenge?

With the Permission to Dance Challenge, BTS fans have the opportunity to show their own dance moves to BTS’ new single.

“… anyone from across the globe can create a 15-second YouTube Short right from the YouTube mobile app, replicating the core dance moves from the ‘Permission to Dance’ music video. The dance moves for this challenge are the ‘International Sign’ gestures that the septet was seen doing in the music video, bearing the meaning ‘Joy,’ ‘Dance’ and ‘Peace.’ As the ‘Permission to Dance’ lyrics encourage listeners to move to the rhythm of their heartbeat, BTS is bringing the world together again with this special dance and inviting people to add their own style to their YouTube Shorts creations.”

The challenge with last through Aug. 14. Once the Permission to Dance Challenge is over, BTS will select a certain number of videos to be featured in a compilation video.