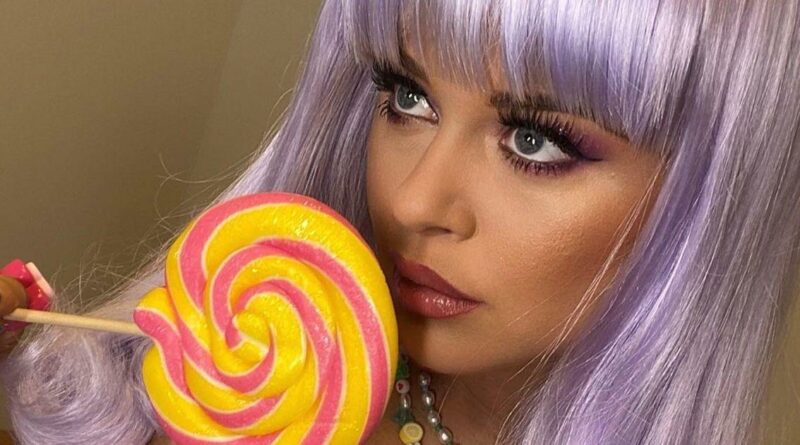 Emily Atack was unrecognisable as she dressed up as Katy Perry for Celebrity Juice.

The Inbetweeners beauty shared snaps on Instagram of her channelling the Roar singer in a wild and colourful outfit, and fans could not get over the transformation.

The images showed the actress dressed as Katy in her California Gurls video, complete with a long, pale purple wig and a purple heart-shaped deely-bopper.

Emily was dressed in a short strapless dress that was a mix of bright colours and had a cupcake and ice-cream covered bustier to flaunt her killer curves, leaving her fans very hot under the collar as the outfit struggled to protect her modesty.

Her endless legs were shown off in towering chunky pink platforms, and the star clutched an orange and pink lollipop in her hand.

In one of the pictures she was joined by fellow Celebrity Juice star Joel Dommett, who had dressed up as the show's host Keith Lemon in a white suit and a ruffled wig.

"Welcome to the Keith and Katy UK tour," Emily captioned the snaps.

Fans loved the fun shoot and were blown away by how much the star looked like US singer Katy as they rushed to compliment the star on the gorgeous costume.

One posted in the comments section of the series of snaps: "Actually thought that was a Perry post. Then I saw Atack!!"

Another admirer said they were "beyond obsessed", while one of Emily's fans gushed: "Oh my God!"

As the cast of the ITV show got into the swing of things, Emily's Celebrity Juice co-star Laura Whitmore also gave fans a peek at the racy Kylie Minogue costume she donned for the episode, sending fans wild.

The presenter opted to be Kylie from the Can't Get You Out Of My Head video and uploaded several snaps showing her draped in a floaty white hooded top.

Laura stole the show in the iconic costume as she posed for the camera, and it is safe to say fans can't wait see the team's antics play out on camera.