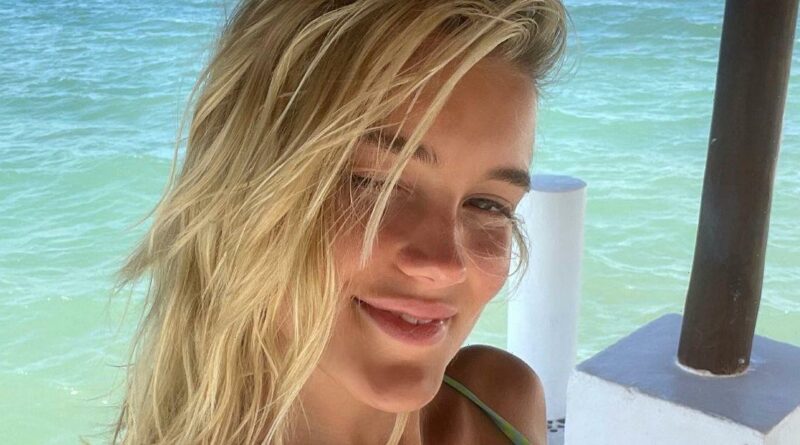 She recently jetted off to Jamaica after working her socks off over the festive period.

And it’s fair to say Mimi Slinger is making the most of her tropical vacation as she left her loyal legion of fans green with envy after she shared her latest holiday snaps online.

Taking to Instagram on Tuesday (January 17), the former Emmerdale star showed off her famous curves as she took a dip in the ocean.

The blonde bombshell, 19, opted for a matching black and white tartan bikini which showed off her toned abs as she took a swim in the crystal-clear sea.

Mimi opted to go makeup free for her spontaneous dip as she could be seen jumping care-free into the water.

It’s clear to see the actress-turned-model has been soaking up the sun on her luxurious trip as she showed off her glowing golden tan beneath the clear waves.

The TV personality pulled her luscious long tresses back from her face as she beamed to the camera while enjoying a swim on holiday.

She playfully captioned the duo of snaps: “Playing mermaids” as her loyal legion of fans flooded to the comments section to shower her with compliments online.

One user penned: “You are unreal so pretty [fire emoji]” as another gushed: “[fire emoji, heart emoji] just stunning inside and out [praise emoji].”

A third echoed: “You look beautiful Mimi [heart eyes emoji” meanwhile one fan chimed in with: “You are the most adorable human.”

It comes after the teenager – who played the role of Leanna Cavanagh in the legendary ITV soap – rang in the new year with a sizzling bedroom photoshoot.

For the monochrome snap, the TV star opted for a black and white plunging zebra print dress which perfectly matched her freshly designed bedroom.