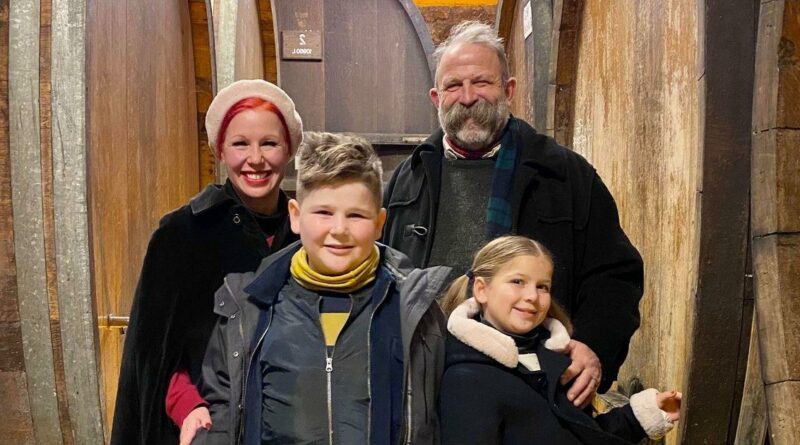 The stars of hit Channel 4 series Escape to the Chateau sent their fans wild as they shared an adorable snap on social media to mark an important family milestone.

Posting on Instagram, Angel and Dick shared with fans a picture of Dick holding Petale in his arms while their son Arthur smiles on and daughter Dorothy kisses the pooch’s paw.

The caption read: "Can you believe it's almost been two years since Petale came to live at The Chateau. Here she is on her very first day with the Strawbridges."

The show's fans couldn't get enough – especially how much the two kids had grown.

One wrote: “Everyone looks so so happy with Petale’s decision to live with you all !”.

Another agreed with: “The kiss on the paw melt my heart.”

A third fan said: “Aww so cute but look at Arthur and Dorothy!!! They look so tiny there!!"

Meanwhile, Dick, 62, shared an emotional tweet on Tuesday morning at the end of their "special" tour, after he and his family visited cities around the UK sharing stories.

The retired Lieutenant Colonel and engineer toured the UK with his wife Angel and their two children, sharing their stories about transforming their home in north-west France. Channel 4 star Dick wrote on Twitter: "Can’t quite believe it but our tour has finished… We ended with a wonderful night in Belfast followed by an amazing finale in the London Palladium this evening.

"It’s been very special and tomorrow night we’re in our own beds for the first time in nearly six weeks!"

Fans rushed to show their support, with one writing: "It was a pleasure to see you all on the tour, you’ve worked so hard. Great to see hard work and perseverance paying off, thanks for sharing your story and enjoy your first night at home!"

Another fan wrote: "Congratulations, have loved seeing updates from people seeing your show. Enjoy your own bed after so long, there’s nothing like it!"

The tour came after the success of their Channel 4 reality show Escape to the Chateau, which followed the family as they renovated a 19th century 45-bedroom chateau they bought in 2015.

The series burst onto screens for the first time in 2016, and has been airing every year since.

There have also been a number of extra episodes added to streaming services.