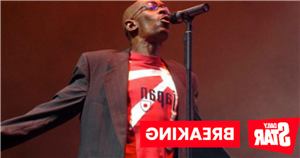 The frontman, real name Maxwell Fraser, passed away "peacefully in his sleep".

Issuing a statement to devastated fans via Twitter, Sister Bliss said: "Maxi Jazz 1957 – 2022. We are heartbroken to share that Maxi died peacefully in his sleep last night.

"Sending love to all of you who shared our musical journey. Look after each other y’hear."

Maxi's official Facebook page also put out a lengthy statement, which read: "We are heartbroken to say Maxi Jazz died peacefully at his home in South London last night. He was a man who changed our lives in so many ways.

"He gave proper meaning and message to our music.

"He was also a lovely human being with time for everyone and a wisdom that was both profound and accessible. It was an honour and, of course, a true pleasure to work with him.

"He was a brilliant lyricist, a DJ, a Buddhist, a magnificent stage presence, car lover, endless talker, beautiful person, moral compass and genius."

Devastated fans have already been sharing tributes to the star on social media, with one writing: "Oh my gosh! I’ve seen Faithless several times and I cannot believe this. My thoughts and prays with Maxi’s family and the whole of the Faithless team."

Another echoed: "Oh my goodness. So sorry to just hear this!"

DJ Dr Rubberfunk wrote: "Oh no! Maxi! Big love to you and Maxi’s family & friends. Feel so privileged to have spent time working with you both in the early Faithless days, will treasure the memories & the music."

As another fan wrote: "Very sorry for your loss. He and you were part of something iconic for so many of us. I doubt many would fail to recognise insomnia instantly and relish those lyrics. Timeless."

Soul Food Cafe star Maxi was the lead vocalist of the electronic band Faithless, and even performed alongside the likes of Robbie Williams on his track My Culture from collaborative album 1 Giant Leap.

The group, which also featured Rollo and Sister Bliss, released a number of hit tracks together including Insomnia and We Come 1.

One of his last projects came with the founding of Maxi Jazz & The E-Type Boys in 2015, providing lead vocals and guitar.

He was also a keen racing driver and car collector, showing off his extensive collection on shows like Vroom Vroom on Sky One.