FLORENCE AND THE MACHINE

I don't know if Florence Welch had heard of the death of Aiia Maasarwe, but her music on Friday night offered a salve for a city in mourning.

The star of Florence and the Machine took the stage at the soldout Sidney Myer Music Bowl only a few hours after Melburnians carried flowers to a vigil for the international student.

Barefoot and wearing a flowing sheer peach dress, Welch opened the show with the first track on her latest album, the melancholic June, before launching into the powerful anthemic Hunger. 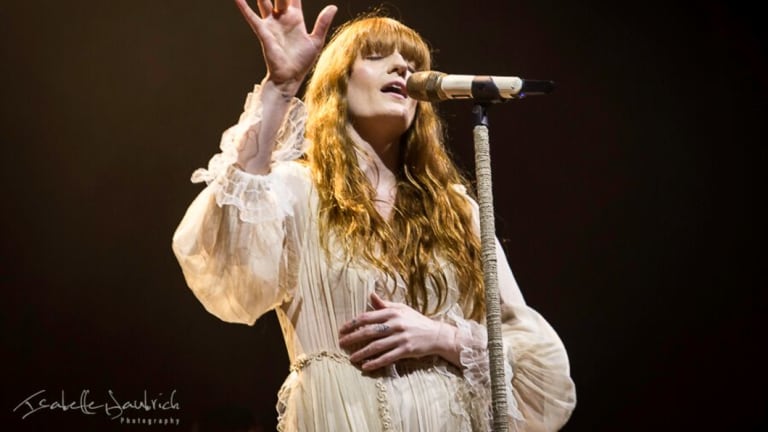 However, it was when Welch introduced Patricia, dedicated to musician Patti Smith, that she seemed to speak to Melbourne's pain.

The song famously describes Smith as Welch's North Star, but the singer told the crowd part of the song is "definitely not" about Smith.

"It's kind of about toxic masculinity," she said. "There is not a lot of toxic masculinity at a Florence and the Machine show. If you are here you probably really believe in women so thank you, sing it with us, rage with us this evening."

The crowd sang along with Welch's soaring and haunting vocals. "You're a real man, and you do what you can / You only take as much as you can grab with two hands / With your big heart, you praise God above / But how's it working out for you, honey? Do you feel loved?"

I've seen Florence and the Machine three times over the years and each time they have delivered a consummate show interspersing new songs with classics like Patricia, Dog Days and Ship to Wreck.

Welch is clearly the stand-out of the tight eight-piece band and she carried the crowd with her as she jumped and twirled around the stage executing balletic spins and dancing into the audience.

At one stage she warned "this is a very active show" but she wasn't just referring to her own dancing.

Instead she requested the crowd hold hands for one song, hug each other for another and finally, and "most confrontingly", for everyone to put their phones away to create a genuine moment not recorded by anyone.

Welch said she wanted to create a "collective consciousness" after what has been "a really, really rough couple of years" for the world.

"It seems there is a lot of pain everywhere," she said.

However, Welch's message was one of hope despite the pain as she ran into the crowd again to embrace fans for her fiery song What Kind of Man.

"My heart is hurting as I'm sure many of yours are on a daily basis but I just wanted to say to you please do not give up hope, please keep showing up, please keep doing what you can because hope is an action," she said to thunderous applause. "Change and a revolution in consciousness starts with individuals."