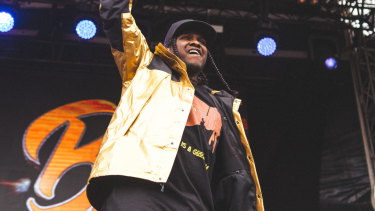 With heavy rain followed by intermittent squalls and patches of sun, Melbourne threatened to deliver a day of four seasons for St Jerome's Laneway Festival's first outing at its new home of Footscray Park on Saturday.

That was until Baker Boy brought the six seasons of Arnhem Land down with him from the tropical north.

Drawing a large crowd early in the afternoon, the young Indigenous hip-hop artist and his sizeable entourage, however, were made to wait.

First the mayor of Footscray delivered a lengthy speech, which would have been more at home at the opening of the new wing of a library, even as strong gusts threatened to bring down overhead strobe lights.

But as the mayor welcomed "The Baker Boys", Danzal Baker himself exploded onto the stage in a burst of energy – and the sun broke through dark clouds.

Dressed in black and topped off with a thick gold jacket, the rapper put on a high-energy performance that saw him rap in Yolngu Matha, dance robot-style and play didgeridoo.

In a chill wind, Baker Boy conjured the heat of the tropics, recalling being a boy with a dirty nose, mangoes, sticky nights and the relief of the saltwater breeze.

"Friends and family are the only currency I understand," he said to introduce Mr. La Di Da Di – a song about people with more money than style.

Surf garage rockers Skegss got the gong for the most outrageous band and crowd behaviour, with a wheelie bin crowd surfed onto the stage and given its own microphone.

To be fair, judging by the sea of crushed cans, not many were using the bins anyway.

New York indie rockers Parquet Courts played their classics alongside their latest album. Judging by the crowd's reaction, their new stuff was even better than their old stuff.

Adoring fans flocked to local acts The Smith Street Band and Courtney Barnett. The lead singer of the former got his family on stage to sing along with the crowd anthem Death to the Lads, which capped off the set.

Courtney delivered her signature mix of social commentary – black deaths in custody and violence against women – with the detritus of the everyday: not wanting to mow the lawn and the pain of small talk.

If the number of people sitting on the shoulders of others was the criteria, What So Not was, without question, the show of the night.

It fell to the Sydney DJ to play deep into twilight, the sky and its heavy clouds flushed with the last rays of light, the trees of Footscray Park light purple and green and a thin crescent moon shining fierce.

Already in raptures to the chunky dance beats, the crowd went off as a menagerie of inflatable animals, pineapples and ice blocks was set loose upon them.

Those in for a double dose of deep electronica then backed up for Jon Watkins, who finished the night by taking his crowd to strange and wonderful places.

This was a deeply esoteric show, with the English DJ silent and in shadow as behind him a screen ran gorgeous visuals, taking the viewer under the sea and into the cosmos.

Not all paying punters were able to take that journey, however. Some, who hadn't read the relevant fine print, had their $169 tickets cancelled after stepping outside of the venue and were ruthlessly refused re-entry.