‘Friday’ singer Rebecca Black has opened up about the online abuse and death threats she received over the song that everybody loved to hate when it was released back in 2011.

Black was just 13 years old when the music video was posted on YouTube and now, at the age of 20, she has revealed that it took her years to get over the abuse she received.

“I saw everything,” she said on BBC Radio 5 live. “When I started reading those negative comments I just couldn’t stop. I just kept going and going and going.

“People commenting don’t think a real person has to read this and move on with their day.” 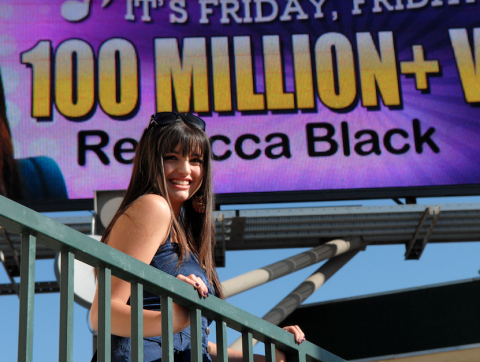 ‘Friday’ was dubbed “the world’s worst song” by critics, but Black never could have anticipated the extent of the abuse she would receive for it.

“I saw it the minute it went on YouTube like everyone else. We thought, ‘It’s not like this is going to go anywhere.’ It’s not like I thought the whole world was going to see it and pick it apart.”

The singer also discussed how she felt like she was defined by this one moment in her life, which haunted her in meetings, in the studio, on dates and in high school.

“It just became this thing that was so personal to me all the time.”

According to the BBC, Black even received a death threat following the single’s release, which was investigated by the police.

“I just had to breathe it all in, suck it up and be good,” she added. “And doing that while everyone is just constantly ripping away at every piece of you, you are left with bones, you’re left with nothing.”

But Black says she feels she has been able to process the abuse and move on with her career.

“It was like being able to put your head above water,” she added. “I could talk about something that wasn’t ‘Friday’.”

She’s now promoting her new single, ‘Satellite’, claiming: “I was 100,000% proud to put my name on it and feel like it is absolutely me.”