Home » Music » From the Archives: Schools ban the Beatles 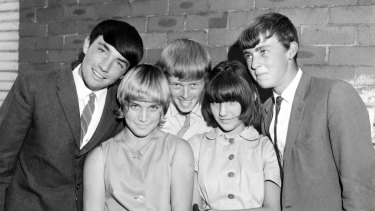 School students show off their Beatle haircuts in Gordon in Sydney’s north on 25 February 1964, the year of The Beatles’ Australian tour.Credit:Alan Kemp

First published in The Sun-Herald on March 1, 1964

'Beatle war' is raging between the principals and teachers of Sydney schools and their pupils.

The main battlefront appears to be the North Shore, where Beatlemania is sweeping the schools.

Some pupils are even wearing Beatle haircuts in defiance of teacher warnings.

Senior students at Ravenswood Methodist School for Girls at Gordon were told to get rid of their Beatle cuts or face expulsion.

At North Sydney's Monte Sant' Angelo College all students were told to stop wearing Beatle hair-dos while in school uniform.

At Hornsby Girl's High School every phase of Beatlemania, except the hair-styles, has been banned.

"We are not allowed to sing Beatle songs around the school, on the way to school or in the trains," said Hornsby High pupil, Charlotte Watson, 14. 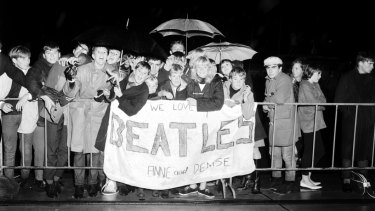 Young fans await the arrival of The Beatles at Mascot Airport, Sydney, on 18 June 1964.Credit:Frank Murray

She said prefects would "tell on" pupils who broke the ban.

"We can't scribble things about Beatles on our desks either – or take Beatle records to school," she said.

"But the haven't stopped us wearing Beatle hair-styles yet," added Charlotte, whose pretty face was crowned with a wonderfully luxuriant Beatle-mop.

"At St. Leo's they don't like long hair," said Greg Cleary, 16, a student at the Wahroonga college. 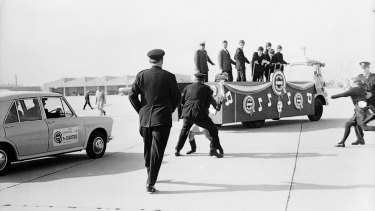 A policeman intercepts an over-enthusiastic fan as The Beatles look on, Mascot, Sydney, June 18, 1964.Credit:Baden Mullaney

"They don't have Beatle haircuts at Chatswood either," said another voice.

"But they haven't banned them yet."

They're jealous of them, and us, because of all the hair we've got, while they're bald.

"But they couldn't make up their minds whether I was a Surfie or a Beatle," said the blonde-headed boy.

Still another teenage schoolboy with his hair done Beatle-style said he thought teachers were down on the Beatles because of jealousy.

"They're jealous of them, and us, because of all the hair we've got, while they're bald," he said.

A group of Ravenswood girls said they had been forbidden to talk about the Beatle-ban at their school.

One said the headmistress, Miss P. M. Evans, had applied the Beatlemania ban, but "we're allowed to talk to anyone about it."

A crowd of teenage schoolchildren gathered outside a record shop near Gordon Station shouting "We love the Beatles" to a Sun-Herald reporter and photographer who asked them what they thought of the English singing group.

"And that's spelt 'luv' – just the way they would say it," they added.

"It's probably our main turnover at the moment," he said.

Sophie, Countess of Wessex made ‘obvious’ choice to be closer with children
Celebrities News