Game of Thrones‘ Emilia Clarke has a story about Brad Pitt once trying to buy a date with her, and it’s totally not as creepy as it sounds.

The actress couldn’t contain her laughter on The Graham Norton Show this week as she described the time that she once crossed paths with Hollywood hunk Brad at a celebrity auction.

“There was an auction thing that happened. They called me and said, ‘Do you want to auction something off?’ Like maybe an experience, watching the show with [me] or something,” she revealed. “It’s lovely, it’s great for charity. It’ll be fine.

“I get there and it’s basically the Oscars. There are so many celebrities in this room, and I suddenly remember that I said that I’d auction something off. So, the fear grows. I was petrified, absolutely petrified.

“The person whose table I was at was being very kind, and put the paddle up [to bid on me], and I was like, ‘Thanks very much’… And then someone else’s paddle went up across the room, and I didn’t really know. Suddenly, it was becoming a bit of money!

“I was thinking, ‘This is absolutely mental!’ Somebody went, ‘Ooh, it’s Brad Pitt!’ I was like, ‘LOL, sure!’ But then I look over and he’s got his paddle up.”

Emilia joked that being bid on by Brad was the “greatest moment of [her] life”, even though the actor didn’t actually win the auction in the end. 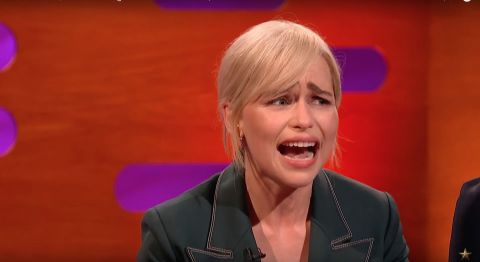 Still, it must have been fun, although not as much fun as the debauchery that the cast of Solo: A Star Wars Story got up to at the Cannes Film Festival.

The Qi’ra actress, and co-star Phoebe Waller-Bridge, shared with Graham that a drunken evening finished off with a genuinely awkward run-in with a very famous fashion designer.

“We just kept knocking on doors to find out where the party was,” Emilia remembered. “We knocked on a few until we found the right one. We’d already gatecrashed one of Stella McCartney’s!”

The Graham Norton Show airs on Fridays on BBC One at 10.35pm, and continues next week with a Jurassic World 2 special featuring Chris Pratt, Bryce Dallas Howard, Jeff Goldblum and music from Jake Shears.

Solo: A Star Wars Story will be released on May 24 in the UK and on May 25 in the US. Book tickets here.