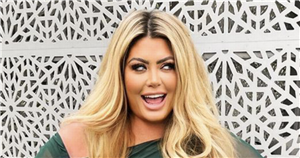 Gemma Collins is looking hotter than ever as she readies herself for Christmas Day.

And, what better way to get into the festive mood than a glam new haircut by a top Essex stylist – Edward Taylor?

After taking to the chair, Gemma appeared looking totally totally different as she showcased her revamped look, a sleek new bob cut.

The 40-year-old looked stunning as she showed off her trimmed and glossy blonde locks.

It appeared as though the Diva Forever star was pleased with the results as she smiled for the camera.

The post was met with lots of praise from the salon owner's own following – with many sending love heart emojis to show their support.

Prior to undergoing a dramatic chop, Gemma took to her own social media feed, showing herself in the hairdressing chair and ready for a change.

Her long platinum hair swaggered down her back and appeared to be damp after a fresh wash.

Meanwhile, Gemma's new look comes after the TV star revealed she had lost three and half stone in weight. The bombshell decided to overhaul her lifestyle and got to work with rigorous daily gym routines – which she shared with her followers to inspire others.

Just this week, the ITV star caused quite a stir online when she showed off her new trim figure on a recent trip to Lapland UK.

Appearing slimmer than ever, the blonde starlet posed on the ice with a penguin aid perched in front of her. Wearing a figure-hugging pair of skinny jeans and a top with huge frilly shoulders, it was easy to notice her significant weight loss.

Accessorising, she added a designer Chanel handbag to complete her outfit for the family adventure.

Other pictures saw the GC cuddle up with her beloved nephew and godson.