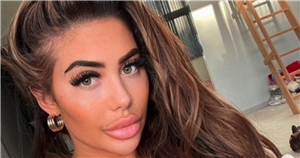 The 25-year-old beauty pouted for the selfie to her 3.6 million social media followers.

The Big Brother babe captioned the post, which was taken in her home: “Dripping like hot sauce.”

Wearing a full face of glam, gold hoop earring and her hair falling just past her shoulders in loose curls, the TV reality star’s lingerie set was punctured by pretty pink flowers.

Chloe’s sweet dog was pictured sitting in the background of the temperature soaring selfie.

Her fans were quick to comment on the post, some using the fire emoji and others said: "WOW" and "Super stunning."

The images were posted after the bombshell’s £1.1 million mansion in Newcastle was broken into by a fan.

According to the Sun, Chloe was left traumatised after the fan climbed over the gate of her dream home in the suburb of the city.

The fan reportedly left a note under a plant pot for Chloe and took pictures of the property before leaving.

It was reported that the break-in left the TV personality questioning whether she wants to be in the public eye anymore.

A source said: "Chloe thought she had moved into her dream home but the incident has put a downer on things.

"This break-in has left her traumatised – people forget that she's only 25 due to all her success. It's left her questioning if she wants to remain in the industry."

Northumbria Police are investigating and spokesperson said: "We can confirm we received a report of an intruder on a property in Gosforth.

"We have spoken to the occupant of the address to offer them reassurance and advice.

"Enquiries are ongoing to establish the identity of the intruder and whether any criminal offences have taken place."