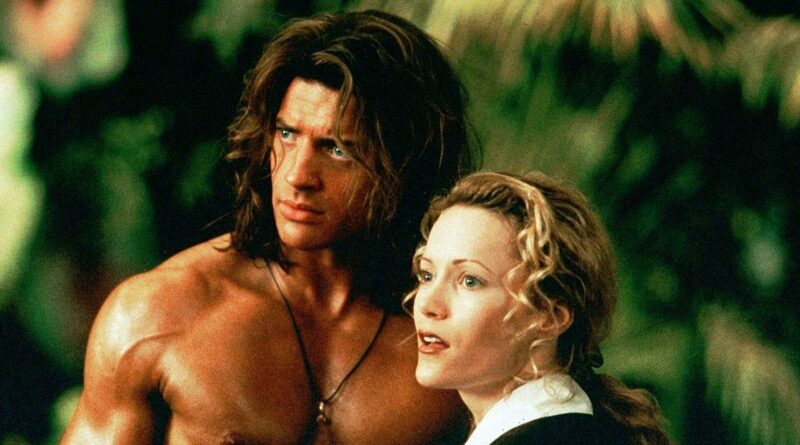 The classic film about buff and lovable klutz George who has a rain forest full of animal friends and tries to make his way in the human world, was a smash hit with viewers back in 1997 making a whopping $174million (£151million) at the box office.

It’s now been 25 years since the classic movie hit our screens and launched the careers of some of Hollywood’s most recognizable names.

Based on the 1960s animated series of the same name, the flick turned actors such as Brendan Fraser, Leslie Mann, and Thomas Haden Church into overnight superstars.

This week, after shunning the spotlight following personal struggles, lead actor Brendan Fraser made an emotional comeback at the Venice Film Festival.

His performance in new movie The Whale has been met with critical acclaim, with industry insiders predicting a future Oscar nomination.

After Brendan's return to the limelight, we take a look at what happened to him and his George of the Jungle co-stars after the film's success.

Brendan Fraser became an overnight superstar when he played the lead in George of the Jungle after the movie made a whopping $174million at the box office.

He went on to carve a very successful career as an actor, starring in the horror adventure trilogy The Mummy from 1999.

He later admitted that the movies took a huge toll on him physically and revealed he underwent several surgeries due to the effects of the stunt work he did on set.

He told GQ in 2018 he had a laminectomy to remove a vertebrae from his spine, a partial knee replacement and a repair on his vocal chord.

His marriage to his ex wife, Afton Smith, also fell apart in 2007 and he was ordered to pay $50,000 a month for a period of 10 years as part of the divorce settlement.

While promoting a film in 2016, fans were alarmed when he appeared disconnected in an interview, which he said was because of the death of his mother a few days prior.

His dramatic transformation over the years due to health reasons also became cause for concern.

But he has now found love again with Jeanne Moore and was filmed wiping away a tear after receiving a six-minute standing ovation for The Whale.

Loveable actress Leslie lit up our screens as rich heiress and George’s love-interest Ursula Stanhope in the hit movie.

Since then, Leslie, now 50, has has appeared in some of Hollywood's most popular comedy movies, with roles in movies such as Knocked Up, 17 Again, and This Is 40.

Fans may not know that she also has a famous husband, film executive Judd Apatow. The pair married in 1997 after meeting a year prior while auditioning for the film, The Cable Guy.

Judd, 54, has produced films such as The 40-year-old Virgin and Bridesmaids, as well many of Leslie's movies.

Since his famous role as the rich and unlikeable Lyle van de Groot, Ursula's overbearing former fiancé, Thomas has gained universal acclaim and an Oscar nomination for his portrayal of Jack Cole in the 2004 comedy drama Sideways.

It was revealed he later stripped naked for the audition and was the only actor who did so.

Fans may also remember Thomas for his roles in Hellboy and Spider-Man: No Way Home and the TV show Divorce, where he played Sarah Jessica Parker's husband.

In 2018, he waded into the topic of diversity in Hollywood when he said he has always preferred working with women.

He said in an interview: "If everybody you work with is a dude, you just get into macho bulls–t. "

Holland Taylor was already a well-established screen star before George of the Jungle, where she played the role of Beatrice Stanhope, Ursula's controlling mother.

The Emmy award winning actress, 79, has been in the industry for nearly 60 years and shows no signs of slowing down.

In 2015, she stunned fans when she revealed that most of her romantic relationships had been with women and admitted that she was dating a much younger woman.

Media reports named actress Sarah Paulson as her partner, which was confirmed months later by the American Horror Story actress.

The couple, who have a 32-year-age gap, have now made numerous red-carpet appearances together and appear to be stronger than ever.

Recently she took Broadway by storm as writer and star of ANN, a one-woman show about the late Texas Governor Ann Richards, which resulted in rave reviews and a TONY Award nomination for Best Actress.

Holland has been nominated for an Emmy seven times, winning Best Supporting Actress in a Drama for playing Judge Roberta Kittlesonon in The Practice.

American star John, 81, played Arthur in the hit film and fans may not know that he is the father of Friends star Matthew Perry..

He appeared alongside his famous son in the 1997 movie Fools Rush In, and in an episode of hit sitcom Scrubs, each time as the father of his real-life son's character.

He also appeared in an episode of Friends, The One with Rachel's New Dress, playing the father of Rachel Green's boyfriend Joshua.

Perry has appeared in numerous films such as Lipstick, The Legend of the Lone Ranger and Independence Day.

He has been married twice – his first wife and Matthew's mother is Suzanne Langford, who was the press secretary of former Canadian PM Pierre Trudeau.

Best known as Ursula’s best friend Betsy in the movie, actress Kelly was already known on the big screen having starred in Hard Time On Planet Earth and The Larry Sanders Show.

She took a break from the spotlight shortly after he appearance in the movie, having only taken on a few minor roles such as Frasier and Law & Order: Special Victims Unit.

Not much is known about the American star since her sudden exit from the spotlight as she keeps a very private life away from the cameras.

Actor Richard had already made his mark on the big screen before playing Kwame in George of the Jungle.

He is noted as being "the first black action hero" for his portrayal of private detective John Shaft in the 1971 film Shaft, and was nominated for the Golden Globe Award for New Star of the Year – Actor in 1972.

The now 80-year-old actor, who is a former model, also appeared in What Men Want and the 2020 horror thriller Haunting of the Mary Celeste.

In 1993, he was diagnosed with breast cancer and had to undergo a double mastectomy and chemotherapy.

He has been married twice and has five children. He famously dated TV personality Cathy Lee Crosby shortly after his first marriage ended.

British-born Greg is a successful film maker and football manager and is the son of actress Geraldine McEwan and influential drama teacher Hugh Crutwell.

His role as villainous poacher Max in the movie wound up being the star’s last after the now 62-year-old quit acting to became the founder of Balham Blazers Football Club in 2001.

In 2011, they were named the South East England Charter Standard Community Club of the Year.

He is the president of Balham F.C. and was awarded the London FA Award for Outstanding Contribution To Football In The Community.

Greg's parents were actress Geraldine McEwan and Hugh Crutwell, who was an influential drama teacher.

After playing poacher Thor in the movie, Abraham went on to carve huge success as an actor, portraying Jerry Markovic on ER and Larry Kubiac on Parker Lewis Can't Lose.

Other previous work includes portraying Mose in the 2003 western Open Range, a role the actor won because he had been cut out of director Kevin Costner's previous film, The Postman. He frequently voices characters on Adult Swim's stop-motion animation show Robot Chicken.

Born in Indianapolis, he is also known for his voice acting and has voiced several video games including the World of Warcraft series.

He is married to Christina Ferreira, but otherwise appears happy to keep his life away from the spotlight.

Don’t count out this adorable capuchin monkey. Adorable ape Crystal followed in the successful footsteps of her co-stars and has remained one of the most successful animal stars in Hollywood since her debut in 1997.

The now 27-year-old has starred in many movies and TV shows.

Her most memorable roles after George of the Jungle include The Hangover Part II, where she was the drug dealing monkey and as Dexter in the Night at the Museum franchise.

Owned by Tom Gunderson, she is taking the movie industry by storm and continues to land major movie roles.

Her Hangover co-star Ken Jeong once said: "She's amazing. She's not a monkey, she's an actor. And quite possibly the best actor I've worked with."