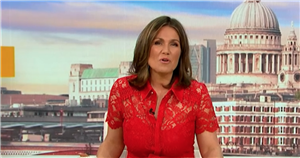 Susanna Reid has been hailed a "natural beauty" by fans after dazzling them with a makeup-free snap.

Posting to Instagram hours before her presenting return to the ITV programme, Susanna floored her followers with a stunning makeup free selfie.

Sporting a shorter hair cut, the former Strictly Come Dancing star was all smiles as she posed on her sofa wearing a relaxed blue T-shirt.

Susanna put her radiant complexion on display in the photo as she also teased "returning to the glam" and a "full face of makeup".

Alongside the selfie, she wrote in a caption: "BRING ON THE GLAM!

"Looking forward to being reunited with a full face of make up and @debbiedresses styling team in the morning.

"See you at 6am @gmb on the day the new PM is announced and Martin Lewis joins us for his Money Mondays."

Replying to Susanna's post, her celebrity pal and Loose Women star Charlene White wrote: "Gorgeous, intelligent, powerful. Good to have you back."

Another commented: "Still naturally beautiful even without makeup. Always the best way to start the week with GMB."

"Makeup or no make up you’re a natural beauty Susanna," another fan concluded.

Good Morning Britain airs from 6am weekdays on ITV.