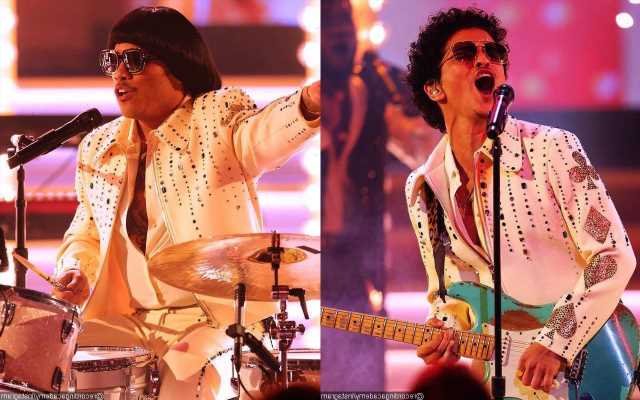 The superduo consisting of Bruno Mars and Anderson .Paak nabs the first televised award of the night after opening the ceremony with a performance of their song ‘777’.

AceShowbiz –Silk Sonic brought the house down at the 64th Annual Grammy Awards. Kicking off the prime time telecast, the superduo consisting of Bruno Mars and Anderson .Paak delivered an electrifying medley before playing a brassy rendition of “777”. Sporting white outfits, they were joined by full band with a horn section and inserted a nod to the seminal house music track “Hot Music” by Soho.

It’s a big night for the pair as they later won a major award. They nabbed Song of the Year for “Leave the Door Open”, which was the first award announced in the televised ceremony. In their acceptance speeches, Mars thanked the collaborators on the album, while co-writer Dernst Emile dedicated the award to his recently deceased mother.

Presenting the award was Questlove, whose Oscar win for “Summer of Soul” last weekend was upstaged by the slap by Will Smith. Taking the stage at the MGM Grand Garden Arena, he joked about the infamous slap as saying, “I’m going to present this award, and I trust that you people will stay 500 feet away from me.”

Earlier that night, they picked up Best R&B performance for the same song at the Premiere Ceremony. They shared the win with Jazmine Sullivan for her track “Pick Up Your Feelings”.

Silk Sonic’s performance was followed by Olivia Rodrigo, who performed a tender-turned-rockin’ version of her huge hit song “Drivers License”. She aptly began the song seated behind the wheel of a spiffy car.

Noah joked that Rodrigo captured “how heartbreaking it is to go to the DMV” before J Balvin took the stage to perform “Que Mas Pues?” with Maria Becerra. He then smoothly transitioned into a rendition of “In da Getto” with an army of dancing arms.

BTS’ (Bangtan Boys) also brought the audience on their feet with a performance of their international hit “Butter”. Jungkook recovered from COVID-19 in time to join the rest of the members.

Looking suave in black suits, the boys opened their performance with a bit of skit, during which V sat next to Rodrigo and whispered something in her ear that made her gasp, before he and other members danced their way to the main stage.