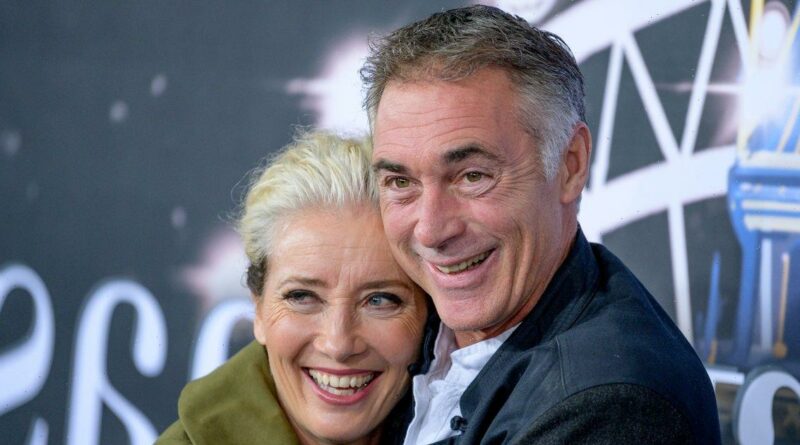 Strictly Come Dancing star Greg Wise and his wife Emma Thompson have been together for almost three decades.

The couple met on the set of Sense and Sensibility and began dating in 1995, shortly after Emma's separation from her former husband Kenneth Branagh.

They tied the knot in July 2003 and have been going strong ever since, though it looks like trouble could be ahead for the pair as Emma recently confirmed that she bought 55-year-old Greg 'a packet of condoms' ahead of his Strictly partnership with Karen Hauer.

The Cruella actress, 62, jokingly told The Sun: "I am worried about the Strictly curse, very much so.

"I have put a packet of Durex into Greg’s good luck card. Just two. But you don’t know, do you?"

Greg and Emma's romance didn't get off to the smoothest of starts, as Emma previously revealed that Greg initially pursued a romance with another of their Sense and Sensibility cast mates.

Speaking on The Graham Norton Show last year, the Harry Potter star confirmed that Greg at first attempted to court Kate Winslet, after believing that Emma was still in a relationship.

Emma said: "Before he did the job, he went to see a friend of his who was a bit witchy and she said he would meet his future partner on the film.

"He assumed it wasn't me because I was married and quite lot older than him so he thought it might be Kate."

After an unsuccessful date at Glastonbury, Greg later credited Kate with setting him up with Emma.

He told The Express: "[Kate] pointed out that we were right for each other and told me that Emma's marriage was over.

It was all meant to be, just as my friend Helen had predicted."

Love Actually star Emma went through her fair share of public heartbreak before ending up with Greg.

Shortly before they began dating, Emma and her former husband Kenneth Branagh went public with their separation after six years of marriage.

Initially blaming the split on their hectic work schedules, it later came to light that Kenneth had been having an affair with Helena Bonham Carter.

Crediting Greg with getting her through the tough period, Emma previously told BBC Radio 4: "Work saved me and Greg saved me.

"He picked up the pieces and put them together again."

Emma wears the the trousers

While Greg may have helped Emma through a bad time, it's the leading lady who wears the trousers in their relationship.

Indeed, Greg recently confirmed that she encouraged him to sign up for Strictly after he initially rejected the other.

Greg said: "I told my dear lady wife when they'd asked me and I said no.

He added: "And here I am and she's thrilled, because she'll be able to relax and support me and watch every Saturday night."

Greg and Emma's daughter Gaia also has a claim to fame, having made a mark in the modelling world over the past few years.

She is also a successful actress, starring with mum in A Walk in the Woods and Last Chance Harvey, as well as appearing in Sweeney Todd on the West End.

She was also praised by fans for opening about her anorexia battle on social media, writing: ""I was terrified of sharing this but I thought that it might be useful to see the polar opposite…who knows…it might even be helpful to another human.

"I don’t know but I know sharing takes me even further out of the shame of an eating disorder. Anorexia is the most deadly mental illness that exists in humans and – even on days I STRUGGLE UGH – I’m so proud that I have moved from the left to the right (figuratively in this pic…ha!).

"Since the first picture was taken the biggest thing that has changed is that I have moved into my own flat. It doesn’t seem massive but if you had told me 16 months ago I would have been secure, stable and happy enough to look after a home, i probably would’ve slapped you across the face to make you see sense.

"And yet here we are. I have tagged some incredible humans without whom I wouldn’t have been able to complete this journey but there are a lot of you out there and I hope you know how much I cherish you."