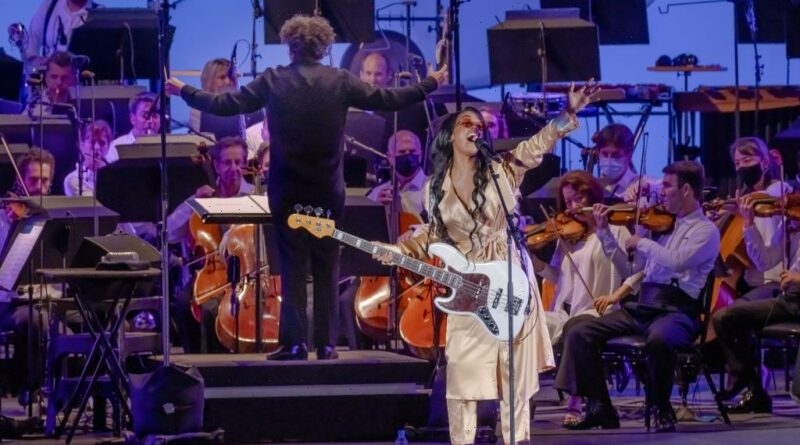 “You know I won an Oscar, right?” H.E.R. asked at the Hollywood Bowl — reminding the audience that however blessed she was to be selling out two nights at the nation’s most storied venue, and anxious at the idea of performing with Gustavo Dudamel and the L.A. Philharmonic, this was just not going to be the highlight of her year. That would be her Academy Award win, at 23 (she’s since turned 24), for “I Will Fight for You,” a song that in this setting lacked the beret-wearing army of dancers who joined her in performance on the Oscar pre-show telecast, replaced by a partially mask-wearing brigade of string and horn accompanists there to help fight the power, as it were. The orchestral assist provided all that you hoped it would, making her “Judas and the Black Messiah” theme song sound even more cinematic than it did in cinemas.

And then a roadie brought her out a white electrical instrument midway through the song; time for the first guitar solo of the night, surely? No, that would have to wait. “I Will Fight With You” was the moment for H.E.R. to shine with a bass solo, to be followed by piano and drum solos later in the evening. Before the night was through, of course, with the Phil long since gone home to bed and leaving to round out the night with her band, she would be playing guitar behind her head, a rite of passage for any Hendrix-loving part-time shredder. All good things in time.

H.E.R.’s two-nighter at the Bowl was proof that her ordination in the R&B-pop-rock priesthood has been right on time, despite her relatively tender age… nothing pre-ordained about it. Not every instinct she has as a performer is a thoroughly seasoned one, but on a pair of nights like this, close enough: She’s right at that sweet spot where “still arriving” and “already commanding” intersect — a magic hour in any real star’s career.

As Friday’s show got underway shortly after L.A.’s magic hour, it soon became clear the format for the H.E.R. + Phil shows would be structured differently than most of the shows that feature pop performers fronting the Philharmonic (or the Hollywood Bowl Orchestra). As recently as Christina Aguilera’s gig with the LA Phil in July, the structure was to have Dudamel lead the orchestra through its own program for the first hour, then have the star and her band join the symphony for the second half… with a certain number of songs in the second set involving just the band, while the Phil sits back for a mental take-six. H.E.R. took up much more of the running time in this weekend’s proceedings, including most of the opening set, too, probably to few patrons’ chagrin, although a night with less straight Phil can’t be counted as a total win.

Given who the headliner was, it was sensible that the two selections the LA Phil did perform on its own, pre-H.E.R., were pieces from Black composers — Adolphus Hailstork’s 1985 “An American Port of Call” and Duke Ellington’s final composition, the mid-’70s “Three Black Kings.” (With printed programs not part of the Bowl experience this season, no one was pointing out that connection for the not classically inclined, but, of course, the music was just as spectacular sans underlining.)

That 25 minutes of music was just enough to satiate the Phil-partial portion of the crowd before H.E.R. emerged to open her part of the show with the work of another Black composer — Marvin Gaye — and a choice, apparently first-time cover of “Inner City Blues (Make Me Wanna Holler).” In co-writing “I Will Fight for You,” H.E.R. was making her ongoing indebtedness to early ’70s music (the late ’60s setting of “Judas” notwithstanding) implicitly and explicitly clear, so there could be no more valid passport holder to explore the “What’s Going On” album than this upstart, with the Phil’s part of the proceedings offering a nice bit of time travel to that fleeting era when soul music went hand-in-hand with orchestral charts almost as much as a wah-wah pedal.

From there, H.E.R. sang eight of her own songs with the orchestral backing, some slightly truncated — with the singer returning to Gaye-level social consciousness with her Grammy-winning “I Can’t Breathe,” with the oft-familiar names of Blacks who’ve been slain in police killings scrolling on the petal-like structures behind and around the stage. She strummed an acoustic on “Hard to Love” and kept it strapped on for “Best Part,” dedicated to a Johnny and Jasmine in the audience with the sing-along admonition: “I know you know the words. It’s only the wedding song of the year.” A young male singer joined her for the duet part, and audience members strained to see if it was the recorded version’s Daniel Caesar, clarified afterward for those in the nosebleeds when she said he was “Miles,” a 16-year-old member of her backing vocal quartet.

Rhetorical questions followed on the way to intermission: “Where my Day Ones at?” — a reference to “Focus” dating back to one of her earliest EPs, when she was still a teen and few knew H.E.R. from “huh?” — and “Can I play my guitar?,” as the electric came back out again for the Act 1 closer “Hold On,” although more of that would have to wait for the second half.

So far, so magnificent. But when the second set began with H.E.R. trading her red heels for sneakers and the orchestra gone from the premises there was a jarring level of cognitive dissonance as the Bowl’s PA system was filled with the jolting sound of pre-recorded tracks. As the Act 2 opener “We Going Crazy” — one of two songs she participated on from DJ Khaled’s recent album — began, H.E.R. was joined by a quartet of young men doing vigorous dance movements while pretending not-too-hard to be playing the horns they had up to their lips, even as backing vocals clearly unconnected to the quartet of singers on stage filled the air. The level of fakery involved wasn’t anything that would seem particularly jolting in the context of a modern pop or R&B festival, for better or worse… but coming just a few minutes after frigging Dudamel had been on stage, it felt like whiplash.

The disappointment of seeing a H.E.R. that felt diminished from the first half continued as “Paradise” — one of 10 songs performed from her two-month-old “Back of My Mind” album — even had Yung Bleu’s disembodied duet part coming out of the speakers, setting up the disconcerting promise that we might soon hear Chris Brown’s feature from the album, too. (We didn’t.) But then, almost as soon as it’d seemed like the second set was destined to feel like a tracks-filled undoing of some of the majesty she’d built up in the first half, things got organic again, and the evening was set aright for a fully gratifying race to the close.

With no more Dudamel to stick near H.E.R. made the audience her foil, as many Bowl performers are wont to, working the passerelle that separates the exorbitant seats from the slightly cheaper one, with and without guitar in tow. She took to the upright piano for the only number in the sets besides “I Can’t Breathe” that counted even slightly as a downer, “I’m Not OK” — prefaced with an inspirational speech that the act of saying so is a salve. Following “Cheat Codes” (with the interpolation of Ms. Lauryn Hill’s “S-Thing,” a reminder of someone who preceded her in precociousness), H.E.R. made good use of a familiar concert cheat — throwing in some cover-song excerpts to ramp up the late-innings mood. Her guitar-fueled, faithful take on Lenny Kravitz’s “Are You Gonna Go My Way” led into a snippet of Queen’s “We Will Rock You” that was really a preamble to her own similarly stomp-paced “Glory.”

A version of Coldplay’s “Clocks” provided an opportunity to show off first on piano, then, after a very brief flight of stairs to a riser, some extended drum pounding. But it was on her own climactic “We Made It” that hands and guitars were put behind heads.” She’d earned the right to show off, and no one with any appreciation for showmanship would begrudge her all this dexterous exhibitionism in the home stretch.

These were moments as honestly, crowd-pleasingly crowning as they needed to be… even if, in some sense, the night’s spiritual climax arrived in the first half, when she was sharing a stage with Dudamel and seemed for all the world like she belonged there. She’s halfway to an EGOT, but maybe there needs to be a new hybrid honor to strive for: the PEGOT… as in someone who’s won all those other things and also felt at home with a house band like the Phil.