It's highly unlikely Melbourne's Hisense Arena has ever heard anything like it. The sound of thousands of (mostly) women screaming, at the top of their lungs, for Harry Styles. 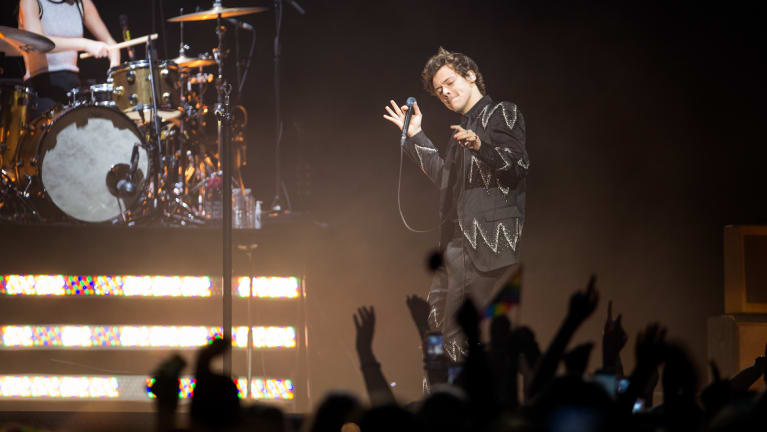 Harry Styles at his first show in Australia in Perth.

Instead of writing EDM, RnB or hip-hop influenced pop – the type that is ubiquitous on the radio – Styles has opted for a rock to soft-rock sound, and an image that’s more emblematic of Brandon Flowers’ or Elvis Presley, than it is popstars like Justin Bieber or Bruno Mars.

Styles strutted around the stage, blowing double-handed kisses and waving to everyone he could, backed by a four piece band instead of a DJ or back up dancers. He went about making people's lives by picking them out from the crowd to ask about their birthday, or what university course they'd just graduated from.

Every now and then he'd sing the first few words of the chorus to Daryl Braithwaite's Horses and even played it over the speakers in full during the time before his encore.

Other highlights of the show were his performances of the moody break-up ballad Two Ghosts, the Arctic Monkeys crossed with Queens of the Stone Age set closer Kiwi, the folk-rock cracker Ever Since New York and a rendition of One Direction's hit What Makes You Beautiful that turned Hisense Arena into a heaving, screaming pit of hysterics.

His Australian opener The Preatures were brilliant, and lead singer Isabella Manfredi made everyone jealous by ensuring the crowd that Styles is "a gentleman, who is just as good looking up close as he is on the stage".