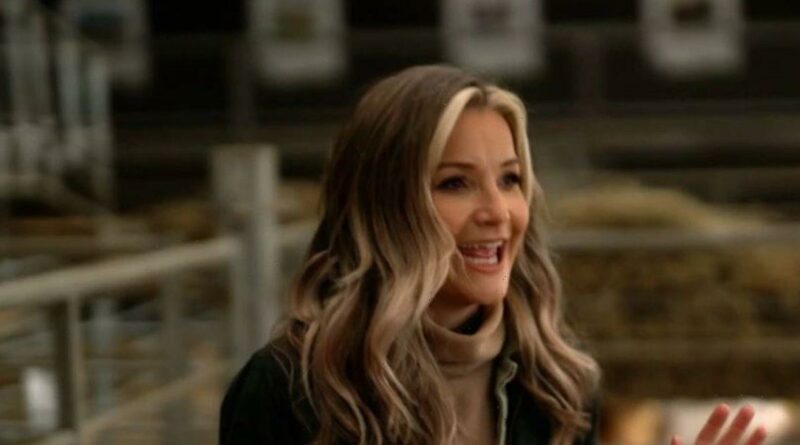 The show has returned for its firth season on Channel 5, but a segment on randy alpacas Zanda and Shakira left fans distracted as they started mating in front of the Springtime on The Farm presenter.

Helen explained to the audience that Shakira and Zanda had been put together in a pen to “have a good time,” as male Zanda was brought in on a lead by farmers David and Rob, who told the audience that if Shakira was interested in his Zanda’s attention then she would drop to the floor.

As Shakira took to the floor, farmer Rob said: “I think she’s keen!”

Helen quipped, “I think he’s keen,” before hilariously asking: “Are you two feeling as uncomfortable as me right now?”

She said: “From the minute you brought Zanda around the corner, he was very excited when he saw the ladies. Shakira looked keen to get involved and they are literally quite involved. What is happening?”

It seemed Zanda was indeed very excited to sow his wild oats as farmer Rob said: “I brought Zanda in on the lead reign because I knew he’d be keen, its been a long time since he mated, that way I can take him back if she isn’t interested, I can hold him back.

“As it happens, Shakira was very receptive and a successful mating is taking place.”

Presenter Helen joked: “This is a first for me, having a civilised chat over two alpacas making babies.”

The Springtime on the Farm viewers found the scene hilarious and took to Twitter to share their thoughts. One user wrote: “Alpacas faces omg laughed so loud #SpringtimeOnTheFarm thank you @helenskelton you legend.”

Another wrote: “Didn’t know I was watching farmhub #springtimeonthefarm.”

The show, which is now in its fifth year, shows presenters Helen and Jules Hudson at Cannon Hall Farm in Yorkshire and television farmer Adam Henson showing his farm in the Cotswolds.