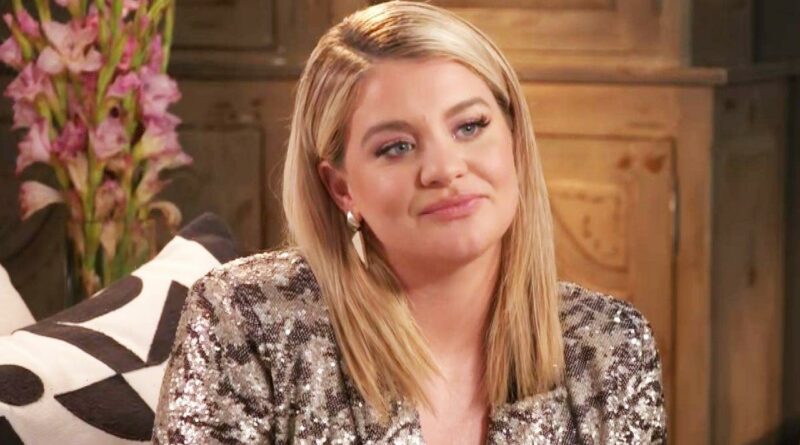 Lauren Alaina’s new album “represents healing.” In a candid new interview with ET’s Rachel Smith, the 26-year-old singer opens up about the depression she experienced at the start of the coronavirus pandemic, and how writing her new album, Sitting Pretty on Top of the World, helped get her through it.

The American Idol alum says she translated her struggle into a song about a breakup, thinking it might be “a little easier to convey what I was trying to say,” but to her, it’s all about depression.

“I was out for a walk. It was when the whole world was shut down, and the only thing I could do is walk in front of my house basically, and I was there thinking about all of the things that I have been able to do and all of the blessings that I have had and how I should have been the happiest girl in the world, but I was drowning in all these emotions,” she recalls. “I am an empath, so I feel all of the other people’s feelings and there was so much sadness in the world.”

“It was so overwhelming, I think for us all,” Alaina continues. “I was mad, and I was mad that I was sad and the only thing that I know to do with those emotions is write about them and get a puppy… so that’s what I did. And that’s a great way to handle it.”

Alaina, whose puppy Opry joined her for the interview, co-wrote 14 of the 15 songs on her new album. She considers it “the best music I’ve ever made.”

“Sitting Pretty on Top of the World is about being a woman and the struggles I have faced being a woman, you know, very public breakups to thinking I was never gonna be in a relationship again to hoping for a future and feeling hopeful,” she describes. “I tried to cover all of that.”

The singer recalls baring her soul on Dancing With the Stars, and being forced to confront questions she was “too hurt or too afraid” to answer.

“This album, for me, is going to reintroduce myself as the 26-year-old woman that I am, and I address a lot of things that I’ve been through and things that I’ve overcome,” she shares. “This album really represents healing for me, and I think the state of the world right now could really use some healing.”

In addition to her new album, fans will also learn more about Alaina in her upcoming book, Getting Good at Being You. The book, due out Nov. 23, dives into some “painful stuff” for the artist, including her past battle with an eating disorder.

“I was on national television at 15,” Alaina points out. “People called me fat, there was a blog that called me Miss Piggy and put a pig snout on my face…[people] can be really cruel, and I didn’t have tools to deal with that.”

Alaina battled bulimia, and says being told that the purging was affecting her voice turned things around.

“They told me that if I didn’t stop, I would never sing again, and I didn’t want that,” she says. “That was a wake-up call for me, and it took me a few years even after that to really get into a better place. And I still go check in with the therapist every once in a while, specifically for an eating disorder.”

“But I’m healthy now, and I got some curves and I’m proud of ’em!” she exclaimed.

Alaina’s love life is also in a good place, but after several public relationships, she’s keeping this one more private for now. In the meantime, fans can see Alaina fall in love onscreen in her new Hallmark movie, Roadhouse Romance.

“Hallmark came to me with this script already ready with me in mind, so that gave me a little bit of confidence,” she reveals. “I’m pretty proud of it.”

Alaina’s new album, Sitting Pretty on Top of the World, drops Friday. Her Hallmark movie, Roadhouse Romance, premieres Sept. 11. Alaina’s book, Getting Good at Being You, is out Nov. 23.