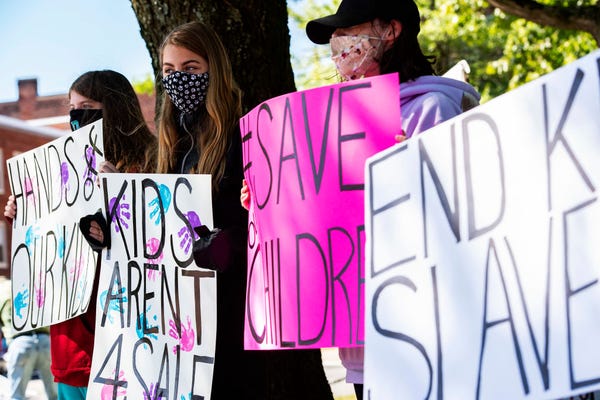 In early July, users on numerous social-media platforms started sharing posts making false allegations that the online furniture retailer Wayfair was selling kidnapped human children disguised as decor. Believers of the conspiracy theory alleged that the titles of several over-priced items on the company's website — which the company told Insider had been mismarked — shared names with those of missing girls throughout the US.

Earlier this month, a similar theory to Wayfairgate — as it's been dubbed, went viral — alleging that phishing scam texts falsely purported to be sent by the USPS were related to a human trafficking scheme.

In both cases, unassuming concerned citizens amplified stories they thought could protect children, unaware that the hoaxes had been linked to QAnon. Beginning in August, rallies nationwide purporting to fight for an end to human trafficking were organized by QAnon supporters on Facebook, NBC News reported.

QAnon is a conspiracy movement that's spread among extremists and the far-right that claims a cabal of powerful elites rules society. Popular versions of the theory center on Donald Trump as the protagonist breaking up a sprawling child trafficking ring run by powerful media figures and Democrats.

With QAnon repackaged into simple, hard-to-challenge "Save the Children" rhetoric, thousands of people have been enticed to stand up for a cause that's linked to a false, pro-Trump conspiracy theory movement which is affiliated with numerous candidates in the upcoming November election.

By using 'Save the Children' messaging, QAnon has become more easily digestible for a wider audience — particularly among women

QAnon devotees have grown in spades in the last few months. An August investigation by The Guardian found that QAnon Facebook groups were "growing at a rapid pace," with a presence in at least 15 countries.

Facebook, Twitter, TikTok, and YouTube have all made efforts in the last six months to combat the rapid growth of QAnon on their platforms. Twitter said it removed 7,000 accounts connected to the theory in July, and Facebook quickly followed suit, removing 790 QAnon groups.

Part of its increasing popularity is due to the movement's co-optation of the phrases "Save the Children" and "Save Our Children," which makes QAnon's misinformation campaigns much more difficult to combat. The #SaveTheChildren hashtag page on Instagram has nearly 800,000 posts, many of which include hashtags like #obamagate and the QAnon slogan, "Where we go one, we go all."

"Everyone agrees that child trafficking is very bad, and the argument QAnon makes is, 'If you're against us talking about this, you're in favor of child trafficking,'" Marc-André Argentino, a doctoral student at Concordia University who researches extremism and its online propaganda with a focus on QAnon, told The New York Times.

The push to "save the children" has inspired a huge increase in the number of women spreading QAnon rhetoric, according to Argentino's research. Argentino has dubbed this phenomenon "Pastel QAnon."

Where are the squares and the marches for the children?! You posted a black square in solidarity for the oppressed. It picked up tons of media exposure. Tons of activism for unified efforts for a better way. You fought for systematic change for those you believe deserve a voice. Now… there are little people who need your help! Hundreds of thousands of {documented} children go missing every year in the US alone. Millions globally. It’s the single most devastating thing occurring on our planet. Yet there is limited media coverage on the topic. Limited discussion at a public level. What will you post for THEM? How will you use your voice for the most vulnerable part of the population?! The choice is yours. It is time. Digital army unite. Divided we are weak, but united we are strong. Now is the time to stand up. For the children. ???? #whereareallthechildren . #savethechildren #wwg1wga #darktolight

As early as April, several popular lifestyle influencers on Instagram were spreading the conspiracy theory's messaging by repackaging it as a call to end human trafficking.

The influencers, most of whom are white women, pivoted their content from lifestyle, parenting, and fashion, to home in on QAnon talking points, emphasizing religious or child-rearing angles.

"I truly believe I owe it to my audience to be more for them during this turning point in our culture," one such influencer, Rebecca Pfeiffer, told Insider in May.

The danger therein, as Argentino said in a Twitter thread, is that "behind the branding and soft colours lies the QAnon we all know, along with all it entails: racism, medical/COVID disinformation, violence, and now the negative impact the hijacking of 'save the children' is having on NGOs and CSOs that actually save lives."

Allegations of pedophilia and human trafficking are common among conspiracy theorists

The QAnon community's obsession with allegations of human trafficking follows a long line of similar movements inspired by pedophilia paranoia.

Conspiracy theories exist as a way to "accuse a shady group of people of doing corrupt, evil things behind the scenes," Karen Douglas, a professor of social psychology at the University of Kent who researches conspiracy theories, told Insider. "QAnon is no different in this respect."

"Hurting children is one of the worst things you can say someone is doing. It's an easy way to demonize your enemy," Kathryn Olmsted, a professor of history at the University of California-Davis who has researched conspiracy theories, previously told Mother Jones.

Conspiracy theories around child abuse date back centuries, and were often rooted in religious anxiety. Beginning in the 12th century, anti-Semitic conspiracy theories falsely alleging that Jews murdered Christian children to use their blood in recipes and other traditions spread across the Christian world.

Throughout the Middle Ages, Jews would often be accused in cases of missing Christian children. These so-called blood libel conspiracy theories persisted through the 1800s, and even into the 20th century, according to the Anti-Defamation League.

The 1980s and early 1990s gave rise to what's become known as Satanic Panic. During the scare, daycare centers around the country were hit with false claims of satanic ritual abuse, and fans of heavy metal music were targeted as potential satanic worshippers.

Despite widespread media coverage of it, no actual cases of satanic ritual abuse were ever found. A 1994 report from The National Center on Child Abuse and Neglect examined more than 12,000 accusations of "group cult sexual abuse based on satanic ritual" recorded by psychiatrists and social service organizations and found "not one that investigators had been able to substantiate," according to The New York Times.

"There's already this great misconception" about what real human trafficking looks like, according to Rachel Lovell, a research assistant professor at Case Western Reserve University's Begun Center for Violence Prevention Research and Education.

The QAnon vision of sex trafficking suggests that members of a secret cabal go around snatching up children. But 91% of the 29,000 missing children cases investigated by the National Center for Missing and Exploited Children (NCMEC) in 2019 were runaways.

Read More: QAnon believers think there's a vast cabal snatching up children in kidnappings, but almost every child reported missing turns out to be a runaway

Lovell told Insider that this kind of paranoia that's not based in real-life sex-trafficking research leads to "anxiety and fear that distracts from the reality."

Polaris, the non-governmental organization that operates the National Human Trafficking Hotline, said that QAnon makes their work in protecting and helping victims of sex trafficking much more difficult.

"Unsubstantiated claims and accusations about child sex trafficking can spin out of control and create more harm than good," a Polaris spokesperson told Insider in an email.

As more people are lured into the world of QAnon with "save the children" rhetoric, Polaris and other organizations only stand to face further difficulties related to the spiraling conspiracy theories.

Have a tip about QAnon? Email this reporter at [email protected]