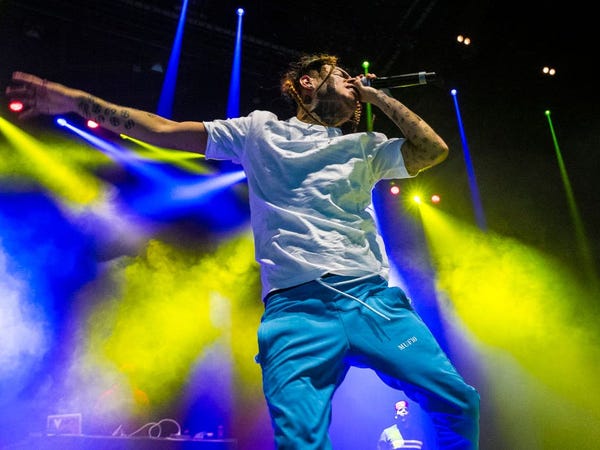 Hype House fans are criticizing some of its young TikTok stars for collaborating with the controversial rapper Tekashi 6ix9ine.

Daniel Hernandez, the 24-year-old rapper better known by his stage name, appeared in videos with several members of the TikTok creator collective. Many comments on those videos called out the influencers for befriending Hernandez, who is currently halfway through a four-year probation sentence stemming from a 2015 child sexual performance conviction.

The collaborations come as Hernandez, called the "villain" of rap by The New York Times, tries to rehabilitate his image and promote his new album after serving time in federal prison and on house arrest after making a plea deal on firearms and racketeering charges in 2019.

Hernandez surprised members of the Hype House with help from the collective's founder, Thomas Petrou, 22, according to a vlog Petrou posted on Tuesday.

Top comments on the video included one calling Hernandez an "abusive predator" and another asking if Petrou and the rest of the Hype House were just ignoring "all the horrible things" Hernandez had done.

Hype House members Olivia Ponton, 18, and Tayler Holder, 23, later posted TikTok videos of each dancing with Hernandez. Insider has reached out to representatives for Petrou, Ponton, and Holder for comment.

In Ponton's video, Hernandez dances with the 18-year-old woman and points at her behind. TikToker Sabrina Quesada commented, facetiously writing, "YES!! set that example for your young fans!! so smart."

Ponton made her video private on Wednesday afternoon.

Hype House member Ondreaz Lopez, 23, was also featured in a video on Hernandez's page. On Tuesday, commenting on a post from the TikTok drama Instagram page, @TikTokRoom, Lopez said the rapper's publicity team had wanted them to film the video. "We ain't even finish the full dance it was so awkward," Lopez said.

As of Wednesday, Hernandez had deleted the video.

The Hype House has underage members, including 17-year-old Avani Gregg. While not presently associated with the Hype House, Charli D'Amelio, 16, is close friends with the group and was featured in a video on Petrou's channel on August 27.

Hernandez pleaded guilty to the 2015 sex crime charge, admitting to using a 13-year-old girl in a sexual performance. The Daily Beast reported last year that Hernandez's ex-girlfriend said he sexually assaulted and abused her, claims that Hernandez admitted to in a 2019 court agreement.