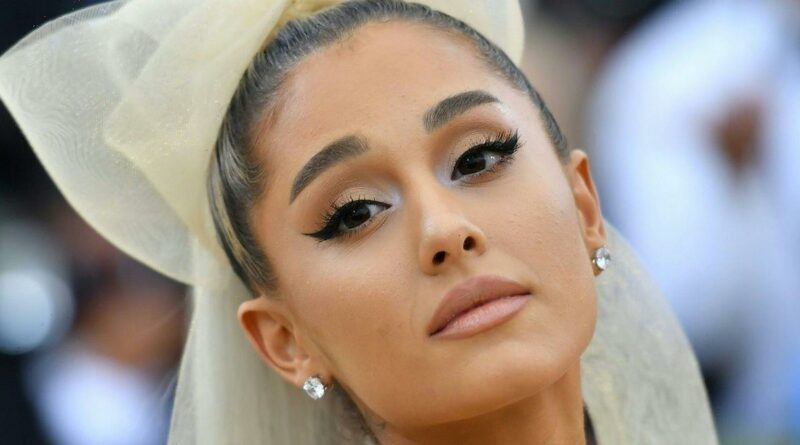 As well as entertaining the world with her incredible talent, American singer Ariana Grande has often hit headlines for her relationship status.

From falling head over heels with her first publicised relationship with Graham Phillips or being briefly engaged to Saturday Night Live star Pete Davidson, Ariana has opened up her heart to both love and tragic loss.

But despite all the ups and downs she's endured in the past, the 28-year-old has remained faithful in her quest to find true everlasting happiness.

Now that she is happily married to estate agent Dalton Gomez, Daily Star has taken a look inside her relationship history.

Ariana's relationship first hit headlines when she dated former The Good Wife actor Graham Phillips when they were both starring on Broadway in 13: The Musical.

The pair's union went from strength to strength and they later wrote a song together called Stick Around.

But despite going their separate ways, the former lovebirds reunited in July 2016 for a dinner with friends from 13: The Musical.

The following year, in August 2012, Dangerous Woman singer Ariana and The Janoskians star Jai Brooks began dating but later split in October 2013, with Jai taking to Twitter to accuse the Disney star of cheating on him with The Wanted singer Nathan Sykes.

Ranting online, Jai said: "Yes I was cheated on. Yes it does suck. Yes I was left for another man."

However, Ariana hit back and said and accused him of threatening her with retaliation if she chose to not be with him.

Taking to Twitter, she responded: "Woke up this morning in complete and utter shock …I guess I shouldn't be so surprised.

"You said to me if I didn't come back to you, you'd make me look bad to the entire world,”

She added: "I’m no longer afraid of you or your lies anymore."

Despite their public spats, the pair reunited briefly in May 2014 but broke up for good in August the same year.

British singer Nathan Skyes also appeared to have a brief relationship with Ariana too.

According to reports from Us Weekly at the time, the publication revealed that Nathan and Ariana began dating in August 2013 following the release of their single Almost Is Never Enough from the soundtrack of The Mortal Instruments: City of Bones movie.

However, their relationship was short-lived, with the pair calling time on their romance in December 2013.

Speaking to Us about the breakup a source claimed to have said that the reason behind their split was because they "hardly ever saw each other" while another said "they just weren’t into it anymore."

Three years later Ariana and Nathan reunited to release a new version of his song Over and Over Again.

One of Ariana's most publicised relationships was with American rapper Big Sean.

After months of speculation, Ariana confirmed she was dating the star in October 2014, labelling him as "one of the most amazing men in the whole word."

A source told Us at the time: "It's gotten serious very fast. They are much happier than in their previous relationships."

Despite being the centre of media attention the couple ended their relationship eight months later in April 2015.

Ariana later mentioned Big Sean in her song Thank U, Next, which was released in November 2018 where she showed gratitude for her previous exes.

In the summer of 2015, following her split from Big Sean, 7 Rings singer Ariana was linked to backup dancer Ricky Alvarez.

Although she seemed to profess her love when she told Billboard magazine in May 2016, "I’m a very happy girl," the pair split two months later. But the pair seem to still be on good terms.

After the release of Thank U, Next, Ricky posted a clip of himself listening to the song and Grande jokingly replied, "IM SORRY U GOT THE WORST LINE … IT WAS MEANT V LOVINGLY," referencing her lyrics, “Wrote some songs about Ricky / Now I listen and laugh."

Musician Mac Miller met Ariana after they collaborated on The Way. The pair later dated from 2016 to 2018.

But by May 2018 that the pair decided to call it quits.

Posting a photo of herself cuddling her former lover, she wrote: "I respect and adore him endlessly and am grateful to have him in my life in any form, at all times regardless of how our relationship changes or what the universe holds for each of us!"

Mac also shared his perspective in July while talking to Beats 1 host Zane Lowe and said: "I was in love with somebody. We were together for two years. We worked through good times, bad times, stress and everything else.

"And then it came to an end and we both moved on. And it’s that simple."

In September 2018, things took a tragic turn when Mac passed away due to mixed drug toxicity.

Following his death, Ariana wrote a touching tribute to him on Instagram which read: "I adored you from the day I met you when I was nineteen and I always will."

Before Kim Kardashian stole his heart, comedian Pete Davison embarked on a whirlwind romance in 2018 following their respective splits from Cazzie David and Miller.

In May 2018, Pete took to Instagram to announce that they were dating, sharing a photo of the couple posing in Harry Potter outfits, which he captioned: "The chamber of secrets has been opened."

A month later, the happy couple got engaged with Pete proposing with a $93,000 diamond ring.

He later told Jimmy Fallon of their plans to wed and said: "I feel like I won a contest, so sick. It’s f—king lit."

However, by October 2018 the couple went their separate ways with sources stating that it happened "too quickly and too early."

Pete later spoke out about their split during Saturday Night Live and said: "I know some of you are curious about the breakup, but the truth is, it’s nobody’s business, and sometimes things just don’t work out, and that’s OK.

"She’s a wonderful, strong person, and I genuinely wish her all the happiness in the world."

In February 2020, the singer sparked relationship rumours with real estate agent Dalton Gomez after they were spotted kissing during a night out with friends.

According to reports, the pair met when he was hired to help her find a house to buy before the COVID-19 pandemic hit.

Ariana didn't confirm her relationship until May 2020, when the pair slowly danced together in her music video Stuck With U featuring Justin Bieber music video.

Later on that year, in December 2020 Dalton popped the question with the excited singer showing off her diamond and pearl engagement ring on Instagram and captioning it, "Forever n then some."

A source told Us: "She has really enjoyed getting to know and falling in love with Dalton out of the spotlight, something she didn't get to do in her past relationships. They are so in love and committed to spend the rest of their lives together."

Ariana and Dalton tied the knot in May 2021.