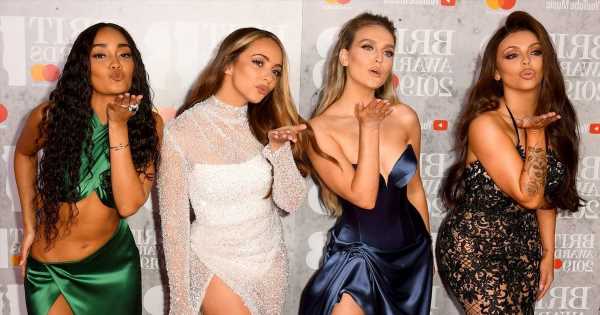 Little Mix shot to fame 10 years ago and have found themselves at the centre of plenty of drama over the past decade.

Jade Thirwall,Perrie Edwards and Leigh-Anne Pinnock and former member Jesy Nelson won The X Factor in 2011 and were catapulted to fame overnight.

Perrie, Leigh-Anne and Jade decided to continue as a trio,. and Jesy released her first debut single, Boyz, as a solo artist last week.

The singer is joined by rapper Nicki Minaj, who features on Little Mix's track Woman Like Me, on the single.

Nicki and Jesy teamed up for an Instagram Live session on Monday night to promote their collaboration, but things took a turn when the rapper appeared to lash out at Leigh-Anne and the rest of the group.

Following the social media outburst from the US rap artist, Daily Star has taken a look into other feuds Little Mix members have found themselves in throughout their career.

A row between the girl group's management Modest and SYCO boss Simon saw the band move to RAC, who released their fifth album LM5, in November 2017.

The major change in record company came after the girls allegedly confronted Simon in a strongly worded email, raising issues they had with his label.

He eventually helped the girls with some of their demands, but by that point his relationship with Modest had reportedly turned sour.

The alleged fallout is thought to have started over Little Mix voicing upset over their lack of recognition on single Woman Like Me.

The girls had added lyrics but are believed to not have asked for any publishing money.

Simon decided to back the loyal staff members who have worked for his Syco label for a number of years.

The singer has since gone solo and has admitted that she's not in regular contact with Jesy, Perrie and Leigh-Anne.

She told Glamour: "It is weird because for so many years we were as close as sisters, together every hour of the day for weeks, sharing beds, laughing, crying, just 24/7 the four of us together and then nothing."

When quizzed about whether she has met Perrie and Leigh-Anne's newborn babies, she added: "No. I’ve sent a few texts, but that’s it.

"I can’t explain it, it’s like there has to be this distance."

Opening up about her time in the band and the toll it had on her, Jesy told Fearne Cotton on her podcast Happy Place how she struggled time and time again in Little Mix.

"I felt like I had no control over my life, She said.

Jesy has previously opened up on past disagreements with her former bandmates.

"I had times and moments when I really loved it, but it felt like there were way more times that I was sad than I was happy," she told the Reign With Josh Smith podcast.

"And obviously I don’t get to make my own decisions. Three people have to agree as well, so there would always be disagreements on certain things."

Little Mix have recently announced their next single is called Cut You Off – and fans suspect it's about Jesy.

The trio gave fans the name of the track in during an Instagram Live where Jade described writing the track as "like therapy".

The X Factor-winning band became the first girl band in history to take home the prize for Best British Group at the legendary awards ceremony on May 11.

At the time Noel was less than impressed by the result and made his feelings known with some scathing comments undermining the credibility of their win.

He said: "Little Mix, with the greatest respect, are not in the same league as Oasis. Not even in the same f*****g sport."

Jade took her opportunity to shoot down Noel's negative comments during an appearance on Never Mind The Buzzcocks.

She lashed out about Noel's own success as a musician – referencing his brother Liam Gallagher as the true star of his family and indeed Oasis.

Jesy has broken her silence over the “blackfishing” controversy surrounding her debut solo music video.

The singer was criticised by some social media users for her appearance in the video for Boyz, her debut solo track.

Leigh-Anne has been accused of sending private messages to a fan who operates on TikTok under the name HoHun.

The social media user claims that the new mum had sent him a message claiming Jesy had blocked her, Perrie and Jade on Instagram.

It is also claimed the star messaged the NoHun account user asking him to “do a video about [Jesy] being a Blackfish”.

Jesy has since denied trying to use black music and style for her own gain.

She explained: "I personally want to say that my intention was never, ever to offend people of colour with this video and my song because like I said, growing up as a young girl, this is the music that I listened to.

“These are the videos that I watched and thought were the best. For me personally, ’90s/2000 hip hop, R&B music was the best era of music.

Rapper Nicki has waded in on the alleged feud between Leigh-Anne and Jesy.

Jesy and her Boyz collaborator Nicki engaged in an Instagram Live discussion on Monday during which time the rapper branded Leigh-Anne a “clown” and accused her of being jealous of Jesy’s solo success.

Once the live discussion was over, the star wrote: "Ayo Jesy!! We got all Leigh jelly btchs akkin all messy #Boyzoutnow."

The post was later altered by Nicki – who edited the wording to change “Leigh” to “these” – however the original message had already been viewed by thousands of fans who interpreted it as another swipe at Leigh-Anne and Little Mix.

During the live chat, Nicki did not hold back as the alleged dispute between Jesy and Leigh-Anne became a topic of discussion.

Turning on Leigh-Anne during her chat with Jesy, Nicki blasted: "When you try to bring someone down because you see them continuing to try and pursue their careers, you are a f***ing clown. And let me tell you, there's a lot of women out here in the US that tan and get bigger lips.

"As long as you're not hurting anyone you should be able to embrace your body, your make-up."

"You don't have to try and ruin anyone – you're in this woman's group and don't talk about this s**t for 10 years and now you've seen she has a video coming with Diddy? Print those text messages out and shove them up your a**.

While defending Jesy, Nicki appeared to aim shots at the members of Little Mix.

Taking to Twitter, the rap aristocrat's said: “Don’t call things out when they benefit your personal vendetta to ppl. Call them out immediately once you see it chile. Don’t wait a decade after you’ve made millions with the person.”

Fans of the girl group have since called for the group to re-record their hit single Woman Like Me without Nicki's vocals and leave the song off their upcoming album, Between Us.

One fan penned: "One month till Between Us, @LittleMix you have one month to remove Woman Like Me x"

Another added: "Woman Like Me feat Cardi B would of popped off more than Nicki. Least she might of actually help us chart on the bb100."

A third person posted: "Are we taking bets on Little Mix re-recording Woman Like Me or completely taking it off Between Us?"

"Can you guys please remove Woman Like Me from Between Us? none of us will be streaming that song anyways," a fourth socil media user said.