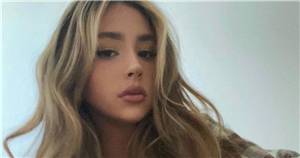 Being the child of one of the world's most famous actors on the planet certainly does come with its benefits – and Sylvester Stallone's youngest daughter Scarlet probably understands this more than most.

Rocky star Sylvester shares three beautiful daughters with his model wife Jennifer Flavin and his youngest child Scarlet seems to be following in his footsteps.

She continues to pursue a career in the movie business while enjoying the glitz and glam that it has to offer.

To celebrate her 19th birthday today (May 25th) Daily Star has taken a look inside Scarlet Rose Stallone's life.

The Hollywood star also has two sons from his previous marriage, however, his eldest son Sage tragically died at the age of 36 from heart disease.

Sylvester's glamourous daughters are very close and are often pictured out and about together in the Hollywood circuit.

Her second eldest daughter, Sistine, also appears to be bitten by the modelling bug as she has appeared in the pages of Teen Vogue, Harper’s Bazaar, and Town & Country.

Being the youngest, Scarlet has a very close bond with her father and is definitely a daddy's girl.

Actor Sylvester frequently shares short clips of Scarlet on Instagram as they are often seen playfully mocking each other for their fans.

Like several young adults, Scarlet hasn't exactly decided what she wants to do with herself full time when she gets older. Despite this, the young star has made appearances in movies and television shows.

One of her earliest roles was in the John Herzfeld produced documentary Inferno: The Making of the Expendables in 2010, which featured actors, Jason Statham, Steve Austin, Terry Crews, Jet Li and other famous names.

In 2014, Scarlet made her movie debut in Reach Me.

The film did pretty well at the time and though Scarlet's role was only a cameo, it was still a great step in the right direction.

As well as films, the young actress has also appeared on popular TV programmes like the Late Show with David Letterman.

Scarlet, along with her two sisters, have also been nominated for Miss Golden Globe at the 74th Golden Globe Awards in 2017.

The prestigious award which dates back to the 1960s is handed out to celebrities’ offspring as a celebration of keeping the Hollywood genes inflow.

Over the past few years or so, Scarlet has taken the social media world by storm and has managed to grow her Instagram page enormously.

As a regular poster, Scarlet often shares videos of herself with her sisters, her dad and sometimes a racy photo or two for her fans.

But in addition to her growing Instagram page, which currently has 718,000 followers, Scarlett also has her very own YouTube channel that she started over three years ago.

Her video was also a hit amongst fans as she received over 700,000 views.