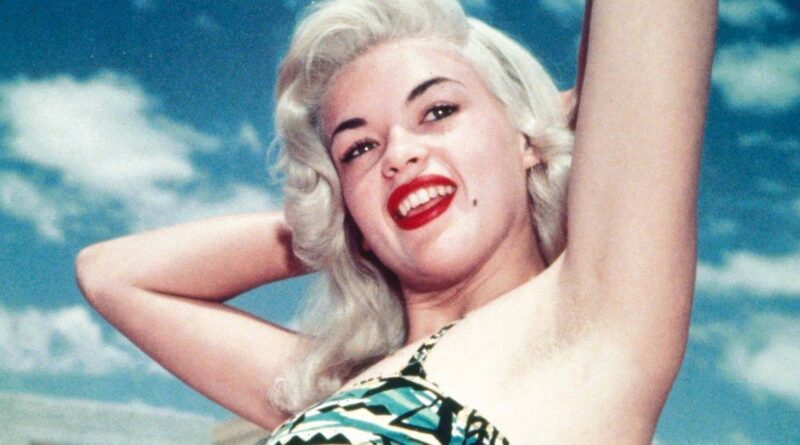 It could be said that without Jayne Mansfield, there would be no Kim Kardashian, Paris Hilton or other celebrity known for plastering their lives all over cameras.

The actress was one of Marilyn Monroe's biggest rivals in Hollywood, but she also lived her private life very publicly and knew how to throw a stunt.

While the blonde beauty will be remembered for her sexy roles – including the first major nude scene in the industry – and the famous photo with Sophia Loren, her life ended in tragedy.

Jayne sadly died in a fatal car crash at the young age of 34 in June 1967 – but the incident itself was surrounded by controversy due to her links to satanism.

Here, as Daily Star continues our new Golden Icons series, we take a look into the tragic life of Jayne Mansfield.

Just like the Kardashians and other reality stars, Jayne welcomed the cameras into her life and let her private life become public.

She had a busy publicity team and in less than a year (September 1956 to 1957) appeared in around 2,500 photographs in newspapers, which helped boost her to international fame.

Jayne made appearances in the UK where she attended the October 10, 1959 football match between Tottenham Hotspur and Wolverhampton Wanderers.

And while celebrities try and avoid wardrobe malfunctions, Jayne regularly fell victim to them, with her clothing popping at the seams, or revealing that she wasn't wearing underwear.

One such incident saw her pose for a photo with Sophia Loren, who was being honoured at a dinner party in April 1957.

Italian actress Sophia said of the incident: "Then comes in Jayne Mansfield, the last one to come. For me, that was when it got amazing."

She added to Entertainment Weekly: "She came right for my table. She knew everyone was watching."

Sophia said: "Look at the picture. Where are my eyes? I'm staring at her nipples because I am afraid they are about to come onto my plate. In my face you can see the fear.

"I'm so frightened that everything in her dress is going to blow – boom! – and spill all over the table."

Sophie now refuses to sign copies of the photo as she "doesn't want to have anything to do with that" and "out of respect" for Jayne, "because she's not with us anymore".

With Jayne courting publicity and allowing cameras into her life, her studio at the time, Fox, was unhappy.

Contemporary columnists noted that Jayne was "far too accessible" to the general public, and Fox ended up punishing her.

Hollywood stars at the time were contracted to a studio, meaning she had little choice in what films she appeared in.

It meant the quality of her films went down – but Jayne refused to give up her publicity courting ways, for which she is best known.

While Jayne is known is one of Hollywood's iconic blondes, she was actually a natural brunette.

Jayne's own hair was seriously damaged by the bleach used to lighten her hair, and she turned to wigs towards the end of her life.

She wore the fake blonde 'dos to keep her public image intact, so that her own hair wouldn't be affected any more.

And it was because of a wig that the rumour spread that Jayne had been decapitated during the crash that killed her.

Pictures from the scenes showed the hair, however it was later confirmed to be a wig – potentially with some of her own hair and scalp too.

Jayne had five children, with the first – daughter Jayne Marie being born on November 8, 1950, when the star was 18.

She was also married to first husband Paul Mansfield, who was three years older than her.

There are conflicting reports of who the father is, with some listing it as Paul, while others alleging that the baby was a result of date rape.

Jayne went on to juggle being a mum while also taking classes at the University of Texas, though also had to travel to Georgia with Paul while he served in the army.

The couple eventually split up and Paul filed for custody of their daughter, which he did not win, and Jayne kept his surname as her professional name.

Jayne went on to marry actor and bodybuilder Mickey Hargitay, but discovered she was pregnant after they divorced.

Being an unmarried mother would have endangered her career though, so she and Hargitay said they were still married.

Their daughter Mariska was born on January 23, 1964 before the divorce was ruled valid.

Jayne was always compared to Marilyn Monroe, who was the sex symbol It-girl of Hollywood at the time.

Fox studios decided to make Jayne their substitute "blonde bombshell" for when Marilyn was unavailable.

Jayne began speaking in a similar manner to Marilyn, and performed in plays that were based on some of her releases.

The beauty once reportedly made a subtle dig at her rival, saying she "was the most beautiful woman in the world", but: "You can take practically any fairly shaped girl, bleach her hair, wet her lips, put her into a tight dress and have her walk a little wiggly and – well, we all look a little alike."

Towards the end of her life, even though her movie roles were not doing as well, Jayne was still considered Marilyn's biggest rival.

On the other hand, Jayne thought that Universal Pictures' blonde bombshell Mamie Van Doren was her main rival.

She later said that Marilyn's death in 1962 was "one of the biggest tragedies in the world".

Towards the end of her life, Jayne became friends with Anton LaVey – a Satanist trying to boost membership of his Church of Satan.

Their desire for fame led to them becoming friends – though some suggest that there was a sexual element to their relationship too.

Throughout their friendship, they were constantly snapped by paparazzi, furthering their pursuit of fame.

Book publisher Carl Abrahamsson, who released a book of photos of the duo taken by German photographer Walter Fischer, said he "didn't think for a minute that Jayne Mansfield was interested in any occultism".

However he did say that the idea of Satanism – "pleasure and life enhancement and just leading a very successful pleasurable life" – were things she "would ascribe to".

Anton performed a ritual on Jayne's son Zoltan, who was six at the time, after he was attacked by a lion at a zoo, with his recovery happening quickly – though, of course, there is no proof LaVey's Satanic prayer helped.

Jayne, speaking of Anton, once said in a press release accompanying photos taken by Fischer: "I think he is a genius and I regard him as an interesting person.

"I am a Catholic and would not believe in his church. I am not a member of the black circle."

She, partner Samuel Brody, and their driver Ronald Harrison were killed in a car crash while three of her children – who all survived – slept in the backseat.

Gossip columnists at the time alleged that Anton had put a curse on Samuel Brody, which eventually led to the crash.

But, of course, there is no confirmation of this.

Jayne died alongside Samuel Brody and their driver Ronald Harrison on June 29, 1967, when they were involved in a high-speed car crash.

Their car – which was also carrying three of her kids, Mariska, Zoltan and Mickey Jr – crashed into the rear of a tractor-trailer, which was driving slow behind a truck spreading insecticide.

The three adults were killed, but the children, who were sleeping in the back seat, survived with minor injuries.

There were rumours that Jayne had been decapitated in the crash, as police photographs showed the top of the car almost ripped off, and what looked like a head of blonde hair in the mangled windscreen.

This was untrue though, and the hair was actually a Jayne's wig, with what could have been part of her real hair and scalp mixed in.

The death certificate said that Jayne's cause if death was a "crushed skull with avulsion of cranium and Brain".

Following her death, a new guard on tractor-trailers was recommended which is sometimes referred to now as the "Mansfield bar".

Jayne's private funeral took place on July 3 in Pennsylvania at a chapel which was part of the Pullis Funeral Home.

Her ex-husband Mickey Hartigay attended, though he was the only one of her ex-husbands there.

Jayne's body was placed in Fairview Cemetery, beside her father Herbert Palmer.