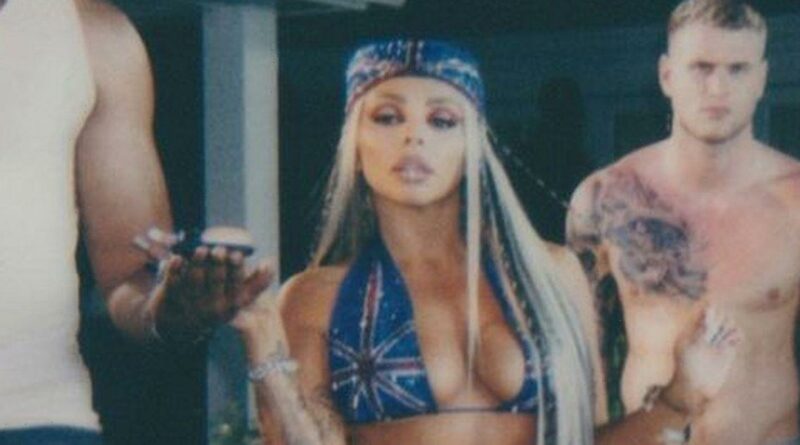 Jesy Nelson has sent her fans wild with a sizzling snap of herself in a bikini teasing her first single as a solo artist.

The 30-year-old singer has been hard at work for months on creating her new solo album after leaving Little Mix in December after feeling like she was under "too much pressure".

And now she has appeared to give her followers a sneak peak at her debut single by taking to Instagram to share a sexy polaroid.

Jesy looked sensational as she slipped into a Union Jack pattered bikini that showed off her ample cleavage and toned legs and abs.

She wore her long brunette tresses cascading over her shoulders under a matching headscarf, and added a sporty element to her look with white high-top trainers and sports socks.

The stunner cocked her hip to the side as she gazed sultrily down the camera lens as she posed up a storm next to some hunky men working out.

Underneath the snap was written the words “Boyz ’21”, which many fans have taken as a hint that this could be the name of her new track.

Fans took to the comments to speculate, with many suggesting the song could be a collaboration with rapper Nicki Minaj.

One fan excitedly put: “She’s coming”, while another commented: “I can’t wait”.

A third wrote: ‘With Nicki Minaj OMG,” while another praised Jesy’s body commenting: “You look so hot”.

It comes after Jesy was seen filming her new music video with a troupe of dancers on Monday night in North London.

It has already been speculated that Jesy’s solo track will go head-to-head in a chart battle with former band Little Mix.

The now trio, made up of Leigh-Anne Pinnock, Perrie Edwards and Jade Thirlwall recently revealed that they would be making a mysterious announcement on Thursday alongside a video of their previous hits with a snippet of a previously unheard track.

Reports say that Little Mix are preparing to release a greatest hits album with a bonus new track alongside it.

This could collide with the release date of Jesy’s first single as a solo artist.

A music insider told The Sun: “Little Mix have had big plans for their tenth anniversary for a long time.

“They started those discussions while Jesy was still in the group. Plans did change after they delayed their tour and Perrie and Leigh-Anne got pregnant. But a celebration of their music feels like the perfect way to mark the occasion

“It is unfortunate and quite awkward for them all that it will be coming out around the same time as Jesy’s music. But there is nothing they can do, really.

"They won’t change their plans just to avoid her. They are going to make the most of their incredible decade of achievements.”