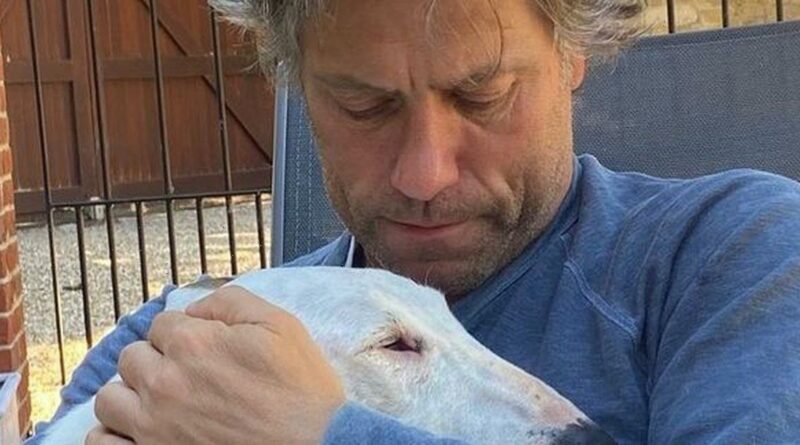 John Bishop has opened up about the heartbreaking death of his beloved dog Bilko.

The 54-year-old comedian has revealed that he was forced to say goodbye to his four-legged friend just hours after they took their last picture together.

Sharing a series of images with his adorable white pup, the television star was full of love as he posed for a snap with the beautiful pooch.

In one snap, John and Bilko appeared to mirror expressions as they looked into the camera for the photograph.

Another picture showed the comic with his arms wrapped around his dog.

Telling fans about his final hours, John said: "His last afternoon was spent sitting on the couch watching the football when I carried him to the garden and we just sat together.

"This is our last picture. He was some friend x."

He also posted another of video of him clapping for Bilko who came for a cuddle on the floor.

John said: "When he heard I was home… before he went totally deaf you could clap to get his attention… always the best of welcomes."

Another snap showed the comedian leaning his head against Bilko for a selfie.

"Two old fells from a few weeks ago," said John.

Posting another picture of him cradling Bilko, he wrote on Instagram: "God I loved him …thank you all from all the family for your kind messages. We will all miss him x"

Unsurprisingly, John's emotional Instagram grid update caught the attention of his 723,000 followers, with many fans rushing to leave a supportive message for the start in the comment section.

One fan penned: "Nothing else is quite like this loss. I’m so very sorry."

Another added: "They give so much in there short little lives, losing them is definitely a pain like no other."

A third person posted: "And he loved you and you gave him the best life."

While a fourth social media user said: "How lucky he was to be so loved. So sorry for your loss x."

The Doctor Who star was also showered with support in the comments from his famous pals.

The One Show host Alex Jones commented: "So sorry!"

Bilko regularly appeared on John’s Instagram page and the actor confessed it made him sad to see his best friend age.

The pooch was 15 years old when he passed away.