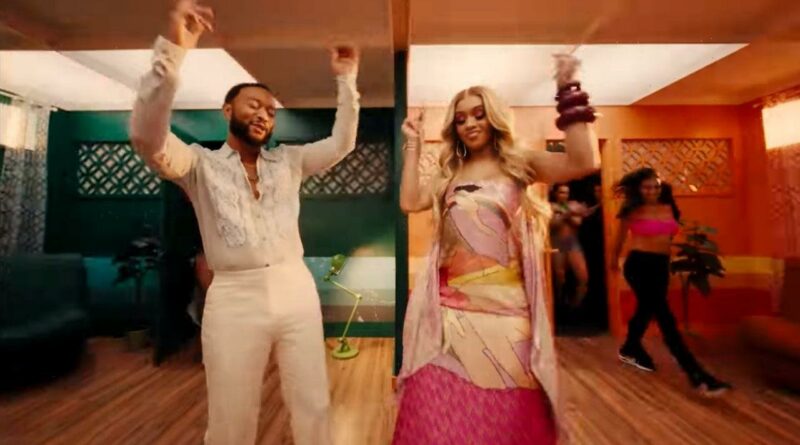 The new dance track, which arrived on August 5, will appear on the ‘All of Me’ hitmaker’s upcoming album ‘Legend’ that is slated to be released on September 9.

AceShowbiz –John Legend and Saweetie know how to bring joy with their music. The “All She Wanna Do” collaborators unleashed a fun music video for their joint single which sees them surprising some female dancers who think they are in an audition.

The split-screen visuals, which is helmed by Christian Breslauer, shows John singing and dancing in a pink outfit. The female rapper, in the meantime, delivers her bars while rocking a sheer blue dress.

On the other side of the wall are dancers, who believe they are participating in an open casting call for a music video. As the clip transitions, the two musicians finally reveal themselves, prompting the dancers to exclaim with excitement.

John dropped the track on August 5. In the chorus, the 43-year-old sings, “All she wanna do is dance/ All I wanna do is get up on her/ Got me in the palm of her hands/ All I wanna touch is her nirvana.” He continues, “Feels like I been waitin’ for/ Forevеr and a night to get this chance.”

Saweetie, for her part, chants, “You made it through my DMs boy/ Because your check was blue/ Fell in love with my attitude, and big bamboos/ And how my booty clap-clap in my tracksuit.” The raptress, whose real name is Diamonte Quiava Valentin Harper, goes on, “Don’t be actin’ new/ He told me.”

“All She Wanna Do” will appear on John’s upcoming album, “Legend”, which is slated to be released on September 9. The two-disc set features guest appearances from the likes of Rick Ross (“Rounds”), J.I.D. (“Dope”), Free Nationals (“Strawberry Blush”), Jhene Aiko and Ty Dolla $ign (“Splash”), Amber Mark (“Fate”) and Jazmine Sullivan (“Love”) among others.

Speaking about the album, John said in a statement, “Until this point, I’ve never used an aspect of my name as the title of an album.” The singer husband of Chrissy Teigen added, “I had to earn that, to live up to it by delivering in the performance and the music. And this is me saying, I’m proud of who I am, I’m confident in the work I’ve done, and I’m just going to declare it.”