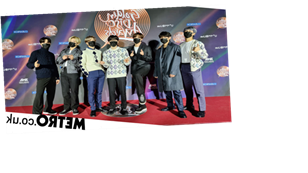 BTS reunited as a seven-piece on the red carpet for the first time in months as they attended the Golden Disc Awards.

Back in November, Suga confirmed that he would be sitting out on activities after undergoing surgery on his shoulder.

However, the 27-year-old was back with his bandmates for the Golden Disc Awards in Korea – and matched with RM for the occasion.

Namgi stole the hearts of the ARMY as they rocked the same printed knitwear at the awards ceremony, with Namjoon (RM) wearing the diamond-patterned cardigan over a white t-shirt and Yoongi (Suga) opting for the jumper version.

The coordination was more apparent when the friends stood beside each other as BTS accepted the bonsang award for best digital song for Dynamite.

ARMYs were loving the sweet matching outfits, and were also feeling emotional as Suga rejoined his friends at an awards show.

The singer missed shows including the Melon Music Awards and numerous US TV interviews as RM, Jin, Jimin, J-Hope, Jungkook and V promoted their new album BE as a six-piece.

Suga admitted in an interview with Weverse that it was difficult sitting out while recovering from surgery, saying: ‘I could see the emptiness [onstage] because we’ve been together as a group of seven for so long. Not necessarily because I’m not there, but because something that should be there is missing.’

But even though Suga had made his big return, he still had to battle for some attention from the band’s golden maknae Jungkook, who seems to have taken his nickname as inspiration for his new hairdo.

Jungkook has gone blonde, and the ARMY couldn’t quite cope with the makeover.

BTS could win their fourth album of the year award in a row at the Golden Disc Awards, with Map Of The Soul: 7 nominated against records from artists including BLACKPINK, GOT7 and IU.

They are also nominated for the popularity award, and are up for the digital song daesang.

At the awards show, BTS wore face masks on the red carpet and on stage, as per Covid-19 guidelines.