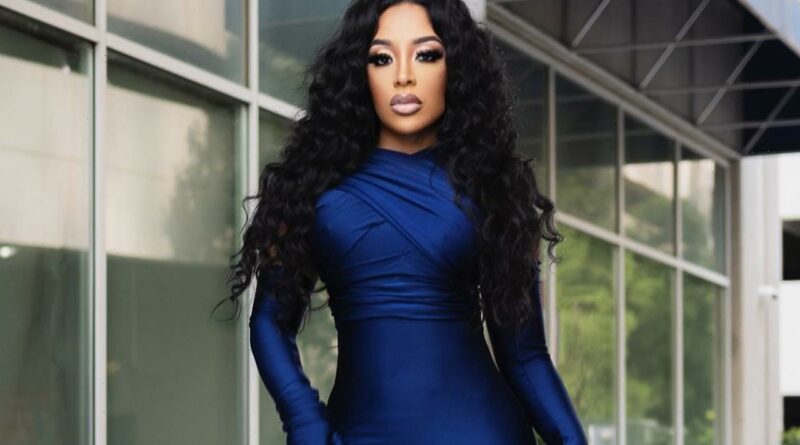 Taking to social media, the ‘Can’t Raise a Man’ songstress insists that she has been flashing her fans ‘for over six years now every show’ after sparking debate on censorship.

AceShowbiz –K. Michelle has defended herself after sparking debate on censorship over her boobs-baring stunt during live performance. Taking to her social media platform, the “Can’t Raise a Man” hitmaker insisted that she has been doing it for years.

Making use of her Twitter account on Thursday, March 3, the RnB singer responded to critics who questioned her racy stage act and simply wanted to know why she did it. She tweeted, “What the f**k is for you to understand. I’ve been on MY STAGE, flashing MY FANS, for over 6 years now every show.” 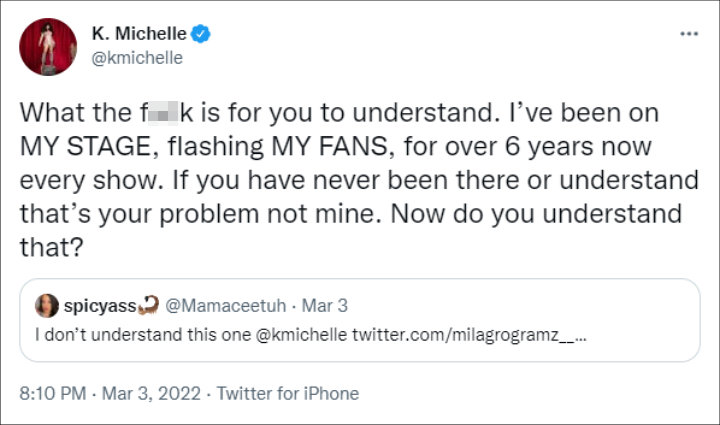 K. Michelle further stressed, “If you have never been there or understand that’s your problem not mine. Now do you understand that?” In a following tweet, the artist, who rose to fame on “Love & Hip Hop: Atlanta“, added, “When will they understand IDC if they get it. I get it! I will live my life exactly how I want and be exactly who I am. I don’t take in suggestions or opinions on who Kimberly IS or Should be.”

K. Michelle left her fans surprised after she flashed her bare boobs during her recent show with Jeezy (Young Jeezy) in Houston’s Arena Theater. While belting out a flawless cover of “Can You Stand the Rain”, she pulled out her breasts for a moment, flashing the crowd before putting her blue top back on.

Indeed, this wasn’t the first time K. Michelle, who underwent surgical enhancements on her breasts and butt, flashed her fans. Back in March 2020, she also showed her breasts after the crowd completed the lyrics to her song “Crazy Like You”. “Don’t make me call your friend. Lie to ’em and tell em’ that you like men. Call yo momma up cause yo daddy be trickin’ on my best friend,” the crowd sang. “I would spend yo money up but you don’t even make enough. Versace Jordans, and Gucci. I burn all yo s**t up.”