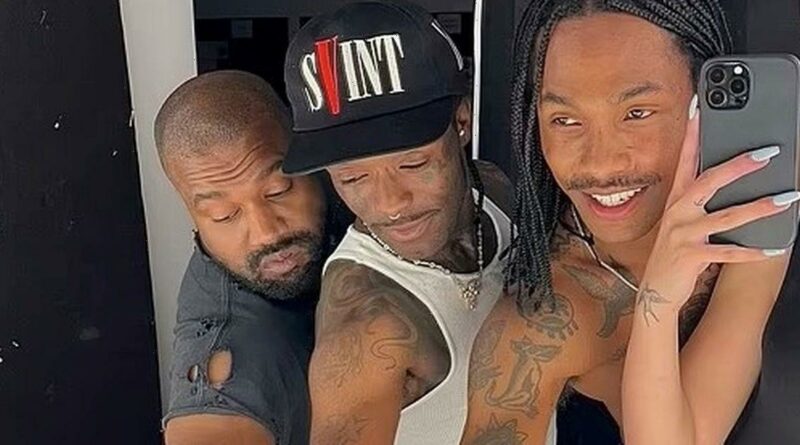 Kanye West and two of his best friends in music have posted a picture of their new matching tattoos.

The 45-year-old rapper, fellow hip-hop star Lil Uzi Vert and singer-songwriter Steve Lacy have all had the same words – "We here forever technically" – inked on their arms.

Kanye posed with Uzi, 27, and Lacy, 24, for the photograph that was posted by the latter and tattoo artist Meza Afram.

Dressed in a black top with holes in it, Kanye is pictured looking down at his fresh ink, having also recently attracted widespread criticism for a distasteful post about Pete Davidson that he shared two days after the Pete had spilt from the former's ex-wife Kim Kardashian.

The post mocked up a fake New York Times headline pronouncing Davidson's death, which read: "Skete Davidson dead at age 28," whilst underneath were the words: "Kid Cudi meant to play funeral but fearful of bottle throwers."

His reference to Kid Cudi is a dig at the rapper's decision to cut short his headline act at the Rolling Loud hip-hop music festival in Miami last month after he was pelted by bottles.

Cudi had been drafted in as a late replacement for the erratic Kanye, who then decided to turn up and perform later anyway.

Reality TV star Kardashian expressed her fury on Instagram at her former husband's "appalling" post and it was deleted after she demanded that it be removed.

According to a Daily Mail source, Kanye's actions have not helped improve relations between the exes either.

The source claimed: "Kim has been vigorously defending Pete. She'll never get back together with Kanye over the way he's treated the people she loves and respects.

"She has tried incredibly hard to have a good co-parenting situation for the children. She won't stand for this type of behaviour from him."

Kardashian, 41, and 28-year-old Davidson ended their 10-month relationship last week and decided to just be friends.

It was agreed that a separation was for the best as she remains based in the US, whilst he is working on a film in Australia.