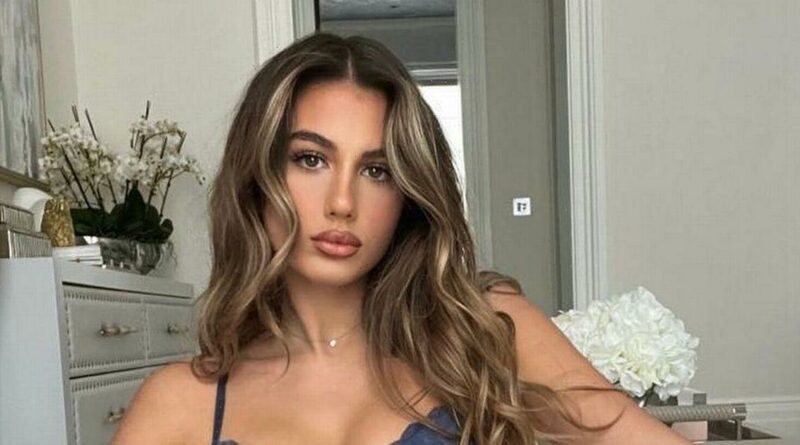 The Apprentice star Karren Brady's scorching daughter Sophia Peschisolido left fans "speechless" as she turned up the heat for her latest red-hot offering.

The 24-year-old Instagram model certainly knows how to work her magic in front of the camera – especially when wearing anything scantily-clad.

Looking stunning, the daughter of The Apprentice star, smouldered for the camera as she showed off her incredible curves in a matching dark grey bra and knickers set.

The social media influencer wowed in the laced garments that fitted her toned body like a glove.

It appeared as though Sophia had undergone a makeover with a glam squad as she boasted immaculate coverage including fluttery lashes and contoured cheekbones.

Unable to decide on one snap, the daughter of the current vice-chairman of West Ham United, opted to treat her 380,000 followers to a trio of images instead.

Captioning the bedroom display, Sophia penned: "Love the Mollie from @bouxavenue in this new colour," before advising her fans to check out selected items in the half price sale.

The three racy images seemed to be a huge hit with Sophia's admirers who took to the comments section to air their compliments.

One person wrote: "You are so unbelievably gorgeous."

Another simply chimed: "Speechless," while a third and fourth person remarked that the bombshell was "sexy" and "stunning".

Sophia's newly found fame on Instagram has certainly rocketed over the past few years as she racks up more followers each day.

As she now boasts a significant fanbase, the internet model has became quite in demand with online retailers – such as Boux Avenue – who are queuing up to work with her.

In recent times, the brunette had teamed up with the likes of FashionNova and BooHoo.