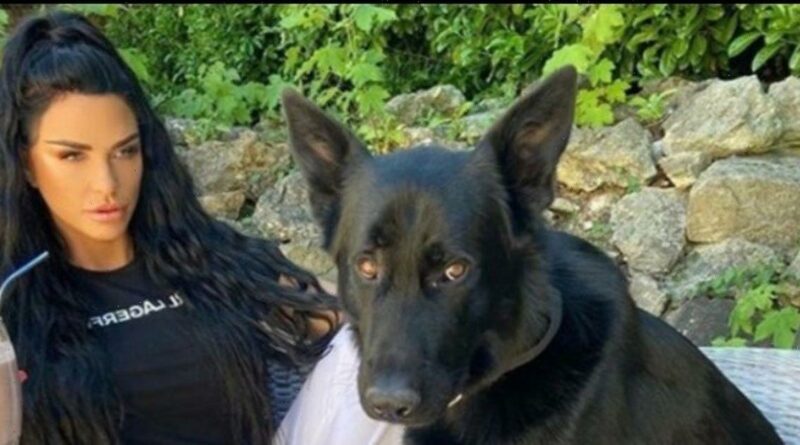 Katie Price has been criticised by animal welfare charities and their supporters after she revealed she was getting yet another dog, following the death of one puppy and giving away another.

The former glamour model is apparently getting ready to bring another guard dog, called Okra, into her home.

She already has a protection dog called Blade, and a small Chihuahua called Buddy.

Charities have slammed Katie after she gave away a French bulldog to a TV producer friend, after her puppy Rolo died.

Another of Katie's dogs, an Alsatian called Sparkle, was tragically hit by a car when it managed to get out of her house and ran into the road.

As well as Blade and Buddy, her fiancé Carl Woods has a dog of his own called Sid.

Katie shared a post on Instagram last night that said she was looking forward to getting another protection dog.

She wrote that she feels at risk, so wanted another dog in addition to Blade.

A source told The Sun: "Katie has bought another black German Shepherd, the same breed as her existing security dog, Blade.

"He's being trained to a second elite level – making him even better trained than a police dog.

"Having both Blade and her new dog Okra around will help make Katie's home feel safer after it was burgled and she was assaulted."

Animal charity PETA has advised against the decision.

PETA director, Elisa Allen, said: "Given her track record with animals, several of whom have died in her 'care', it would be irresponsible and reckless for Katie to be allowed to acquire another one. "And any breeder willing to sell to her is clearly putting profit over the animals' welfare."

Katie first got guard dog Blade in 2019 after being held at gunpoint in South Africa during a carjacking.

Katie's puppy, Rolo, died last year when it suffocated after getting stuck under an armchair.

Katie said in a YouTube video: "It's a bit doom and gloom, I feel we have to do this because me and Princess are getting a lot of stick and I don't understand why."

She added: "At the end of the day, Princess' dog Rolo tragically died and we're absolutely devastated.

"As a mum, the reason I got Princess another dog was because she was do distraught, like I was, about her dog Sparkle getting run over.

"Again, I wasn't even at home when this happened. I actually read it, Pete was messaging me saying 'your dog's dead', I had to read it online and that was a shock. She was so devastated, she's always looking at pictures of Sparkle and saying 'Mum I want another dog'." "Having to make that phone call to my daughter was the worst thing in the world," she said. "Because I don't want to make her heartbroken, she's literally been heartbroken twice for something she's genuinely fallen in love with. She doted on that dog."

Katie continued: "I'm genuinely devastated that this has happened and people trolling us and turning on us, it's not even our fault it's happened. I don't even know what to say.

"Basically I was in the other room because we're going on holiday, packing their suitcases, and there was five people in the other room, so people saying the puppy was left, it wasn't left at all.

"It just got stuck under one of the chairs," in what she called "a freak accident."

Daily Star has contacted a representative for Katie for comment.