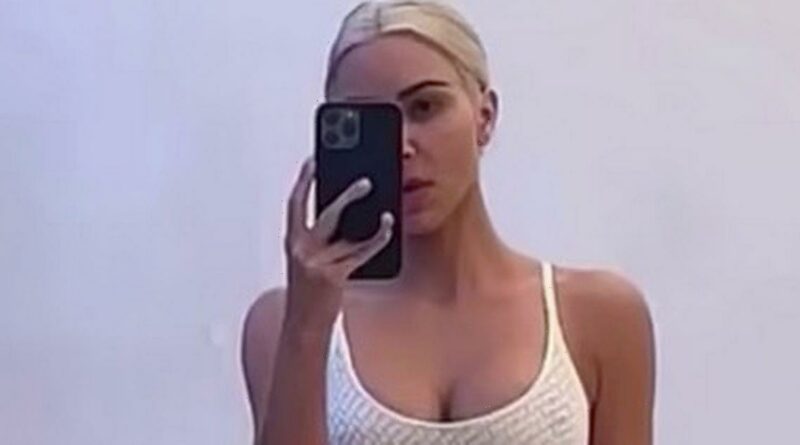 Kim Kardashian has posed in a sexy SKIMS lingerie picture flaunting her famous curves just weeks after her controversial diet to fit into Marilyn Monroe famous dress at the Met Gala.

It appears that the 16lb she lost in the space of a few weeks hasn't crept back after the reality star posted a picture in white lingerie to her Instagram.

The mum-of-four stood in her bathroom in the white lingerie, covering her face with her phone.

Showing an up close photo of the set, she said: "It's like logo mesh and it's so cute and super stretchy. And all the underwear is so cute."

The reality star lost more than a stone in just three weeks for the Met Gala, saying that it was "such a challenge".

She said: "I didn't starve myself – but I was so strict."

Giving some insight into her diet she admitted to completely giving up carbs and sugar for three weeks.

She said: "This is Marilyn Monroe's dress. It's 60 years old.

"I had this idea to put it on and try it on. They came with armed guards and gloves. I tried it on and it didn't fit me. I had to lose 16 pounds."

The reality star added: "I was determined to fit it… I did it…"

But she was slammed as "irresponsible" by Nichola Ludlam-Raine of the British Dietetic Association.

"It's really irresponsible because a lot of people will be reading and watching her, especially people with eating disorders, or young women, thinking that it is possible, or it is needed, to lose such a dramatic amount of weight in a relatively short amount of time, when most health experts recommend losing around 1-2lb a week," she said.

"It's not a sustainable way of living. When you cut out sugars, research shows that we end up psychologically craving it more – and what that can lead to is a binge-restrict cycle.