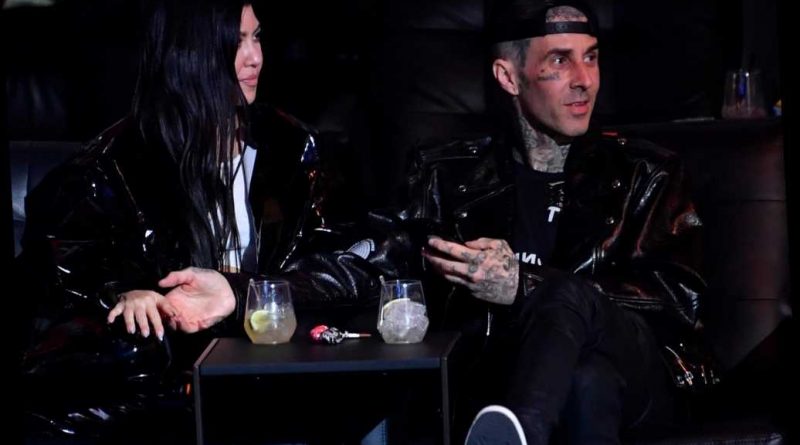 Kourtney Kardashian and Megan Fox's worlds were bound to overlap, thanks to their pop-punk beaus.

On Saturday, the ladies enjoyed a double date with their respective boyfriends Travis Barker and Machine Gun Kelly as the foursome took in some mixed martial arts at UFC 260 in Las Vegas, where Francis Ngannou defeated Stipe Miocic.

Kardashian, 41, cozied up to Barker, 45, in the VIP section at the UFC Apex, just a few feet away from Fox, 34, and Kelly, 30, who met a year ago on the set of their upcoming crime thriller Midnight in the Switchgrass.

Barker and Kelly have collaborated on several occasions, most recently for the latter's fifth studio album Tickets to My Downfall, which also featured Fox on the interlude track "Banyan Tree." The Blink-182 drummer raved about his relationship with Kardashian earlier this month on The Drew Barrymore Show, explaining that it's much easier dating a fellow parent.

"And now I'm spending time with a woman who's a great mom, who's a great friend and you don't have to worry about any of those things," he said. "It just comes natural, it's like a maturity thing. And I also really like missing someone and cherishing the time that I spend with them instead of every day being with them, especially in the beginning of the relationship. I think missing someone is so important."

A source confirmed the couple's relationship to PEOPLE in January, and the couple made it Instagram official on Valentine's Day weekend, long after they bonded over their kids.

The Poosh founder was "ready for a relationship with a more mature guy" when she started dating Barker, a source told PEOPLE last month, adding, "Kourtney and Travis have a long, long history and years of friendship. They've felt like family for years, and she's really close with Alabama, who's just a cool rock star kid."

Fox and MGK, whose real name Colson Baker, made their relationship Instagram official last July after they were first romantically linked that May. She starred as his love interest that month in the music video for his single "Bloody Valentine." In addition to wearing a drop of Fox's blood on a necklace, they recently sparked engagement rumors, when the Jennifer's Body star was spotted wearing another piece of jewelry on her wedding ring finger. "They are very serious and plan on spending the future together," a source told PEOPLE in January. "There will be an engagement at some point, but they are not engaged now."

Fox filed for divorce last November from Brian Austin Green, 47, with whom she shares Noah Shannon, 8, Bodhi Ransom, 7, and Journey River, 4. Green, who is now dating Dancing with the Stars pro Sharna Burgess, previously confirmed their split in May 2020, when Fox was first linked to Kelly.