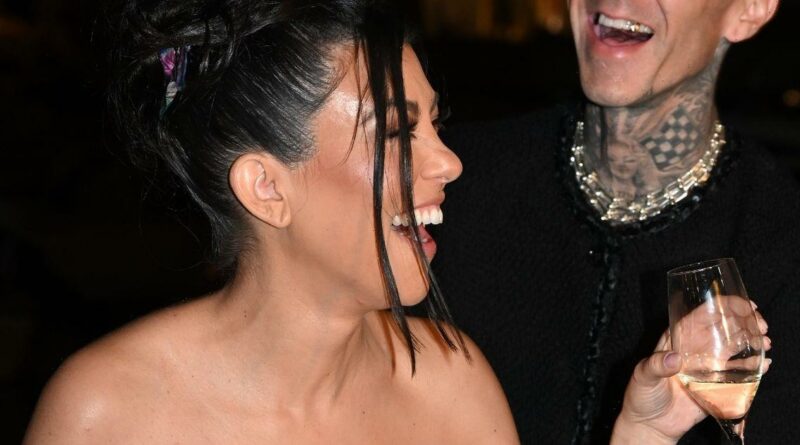 Kourtney Kardashian and her husband Travis Barker have stunned fans with a raunchy campaign for vegan chicken.

The newlyweds starred in a photoshoot for Daring, a plant-based chicken alternative to meat.

The first snap featured Kourtney biting down on a piece of fake chicken from a bright yellow bucket as she wore a pair of black sunglasses and a red manicure.

The bucket featured the Daring brand logo and the phrase “plant chicken for chicken lovers”.

Travis leaned over her shoulder and posed with his face close to hers as he watched her take a bite of the imitation meat.

A black leather jacket was laid by her legs and a ceiling of red lights stretched out behind them as they posed for the camera.

In the second picture, Kourtney was dressed in a red snake skin leather dress and a black harness with silver hardware as she leaned backwards on a table.

She wore her dark hair in a half up-half down style and opened her mouth as she sat on a white tablecloth with her legs around Travis’ waist.

Travis stood over her and fed her the food wearing a black suit jacket covered in safety pins.

Behind Kourtney was a vase of orange flowers and a bucket filled with the Daring brand vegan chicken.

Kourtney wrote: “Guys, there’s chickens that are dying. Why we love Daring’s Plant Chicken,” for her 184 million Instagram followers.

Fans went wild for the couple’s bold look and raunchy photoshoot so took to the comments to share their thoughts.

Another added: “Such a cool couple.”

After a recent outing together, Travis sparked health concerns after he was spotted wearing a hand splint.

The injury is particularly concerning as he is a drummer for the band Blink-182, which means that the splint could hinder his passion and career.

He was spotted in a white t-shirt, black sunglasses and sporting a black splint that covered his wrist, palm and fingers and has yet to comment on how he sustained the injury.