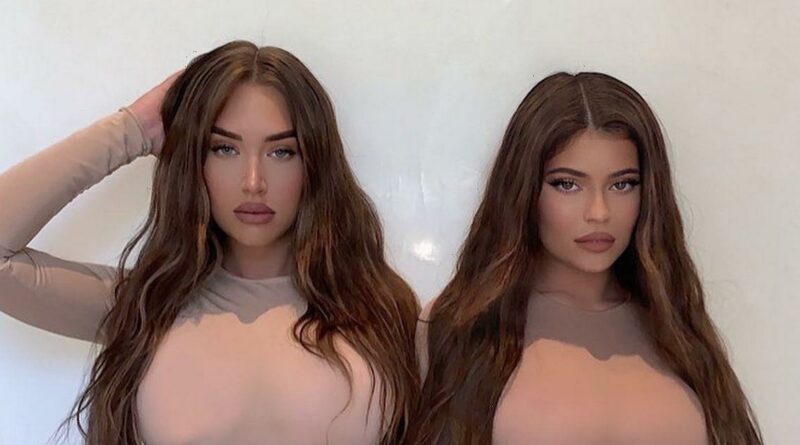 Kylie Jenner has stunned fans with a new bedroom photoshoot with her friend Anastasia Karanikolaou, but some followers are convinced the pair are dating.

Fans were in uproar after they saw pictures of the influencers in matching skimpy outfits as they posed on a bed together.

Kylie laid on the white sheets beside her pal as she stared up at the camera and covered her face with her arms.

Her long brunette hair fanned out above her head as she posed for the picture in a colourful skimpy outfit.

The long sleeve top was covered in multi-coloured spots and featured a plunging neckline which accentuated her chest as she moved her hands above her head.

Jenner’s washboard midriff was exposed by the crop top and the low rise mini skirt, which featured the same pattern as the top half.

The teeny skirt cut off just below her hips and helped highlight her bronzed, glowy skin tone against the white sheets.

Anastasia rested her head on Kylie’s legs as he also gazed up and flirted with the camera.

She wore an identical outfit and placed her hands on her legs to show off her abs and the duo wore matching minimal makeup.

Kylie then posted a picture of herself cupping her chest as she laid on her side, while another selfie showed the star grabbing the camera upside down.

Fans went wild for the photoshoot and gathered in the comments to share their thoughts.

One typed: “You’re so hot, mamas,” with a flame emoji.

However, some fans are convinced that there is something going on with Kylie and Anastasia and wondered whether the duo were dating. A fan commented: “I’m convinced y’all are in lesbians with each other.”

Another added: “Girlfriends for life.”

Others urged the duo to “date already,” one asked whether the photoshoot was a “soft launch” for their relationship while another simply claimed that they “know a gay woman when they see one”.

Despite speculation, Kylie and Anastasia have not mentioned anything to suggest this is the case.