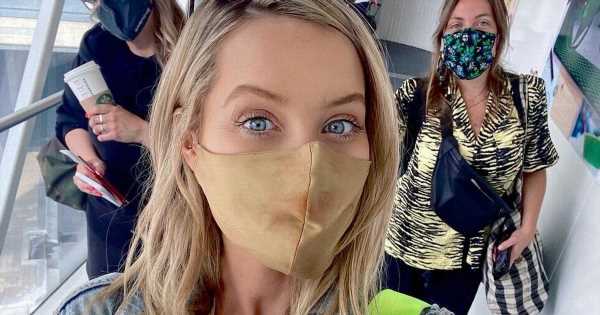 Laura Whitmore has landed in Majorca to kick start filming for the new series of Love Island and she has taken her baby daughter along with her for the ride too.

The excited presenter shared images of her travels for her Instagram followers on Thursday to let them know that she was just about to jet off.

In one of the photos, Laura posed with her face mask on as she walked down the long aisle as she prepared to board her flight.

Two members of her crew could also be seen gleaming behind her with their masks on.

The mother-of-one carried her baby daughter in a baby satchel carrier as she covered her face with her passports.

In the second photo, the 36-year-old appeared to be sitting on the plane as she presented her travel documents on her lap. One for herself and the other for her baby girl.

Both passports were written in Irish and English, as Ireland is still currently in the European Union.

The news comes after ITV officially announced that popular dating show Love Island will return to screens on Monday, June 28 at 9pm on ITV2.

Laura, who presented the winter series of Love Island last year, is excited to be back on TV hosting the highly anticipated programme.

She recently said: "It’s been a year where I think we all need a bit more love and fun in our lives and I think everyone is ready for Love Island to be back – myself included."

This week, Love Island revealed the new contestants that are heading into the villa on their quest to find love.

Luxury events host Aaron Francis is one of this year's hopefuls who recently revealed to Daily Star and other press that he can't rule out the possibility of having sex on TV.

The young chap said: "I don't know how strong of a connection I'm going to build with certain people so I can't guarantee anything really.

"Because I mean look, when two people really like each other things happen. So yeah I can't guarantee anything, we'll just have to wait and see really."