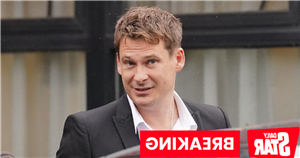 A Magistrates Court has found Lee Ryan guilty of racially aggravated assault after he made drunken advances towards two female cabin crew members onboard a British Airways flight.

The singer who found fame as a member of the boyband Blue had been travelling from Glasgow to London in July 2022 when he told a black flight attendant "I want your chocolate children".

Lee, 39, went on to ask the flight attendant to kiss him while drunk onboard the Embraer E190SR aircraft.

However, flight attendants working on the domestic flight claimed that Mr Ryan was "slurring his words and staggering around" after consuming an entire bottle of port. Mr Ryan was later refused the purchase of any more alcohol and was informed by flight attendants that he needed to return to his seat after he made a comment about one of the crew.

A court heard that he allegedly made comments about Leah Gordan, describing her as a "chocolate cookie" before grabbing her wrist.

The signer famed for hits such as Guilty is accused of being drunk onboard an aircraft, assaulting a police officer, racially aggravated common assault by beating as well as behaving in an abusive way towards the cabin crew.

Addressing the court, Leah Gordan explained that Lee had initially said she was "beautiful" before placing his sunglasses on her. She went on to say: "He was making comments about my complexion, you're my chocolate darling, my chocolate cookie, and I'm going to have your chocolate children.

"It felt like he was saying I was beautiful for a black person because of the way he was describing my colour."

Ms Gordon goes on to allege that Lee approached her from behind, before saying to her: "Before I get off this plane, I need a kiss from you."

She went on to explain that she told Lee to "stay away" before claiming that he grabbed both of her wrists leading other passengers onboard to intervene.

Recalling the incident, Leah said: "He was towering over me like he was leaning in to give me a kiss. He said to me 'I want your chocolate children.' "I was intimidated, I felt a bit embarrassed like I wasn't doing my duty properly. To get comments about my colour whether intentional or not, it was just unacceptable and so derogatory. I just felt like it wasn't fair and I shouldn’t have to put up with it. I don't go to work to be assaulted or harassed."

Lee, who appeared tearful before giving evidence in the dock stated that he had consumed a whole bottle of port and ate cheese at Glasgow's BA lounge after his flight to London City Airport was delayed.

He went on to tell the court that he was "sorry", before saying: "My band member is black, I'm not racist, I've had black girlfriends, mixed-race girlfriends.

"It was banter, just drunk banter I suppose, there was no malice or intention to upset anyone." The singer went on to say he didn't mean to cause distress or be racist, adding that it was "just a poor choice of words" before denying the word chocolate was meant with malice.

On his "chocolate chip cookie" comments, he said: "They're white," before saying he was "sorry" that he had touched Ms Gordon.

In a police interview after the incident, he said: "I wish I could ring her up and apologise and offer her some Blue tickets for the next tour."

Officers from the Met claimed he attempted to bite one of them at the airport – which he claimed to have no recollection of. Meanwhile, another flight attendant who also gave evidence in court claims that Lee approached her before the flight departed Glasgow.

Jade Smith told the court: "He told me he had a problem, that he was being harassed by other passengers, that he was famous and asked did I know who he was."

Lee had reportedly asked for an upgrade from his economy seat to business class but this request was denied as the aircraft was full.

Ms Smith claims Lee was "angry" and demanded to be moved after claiming he was a gold card holder, before adding that he was "slurring his words and staggering around."

She later cut him off from ordering alcohol, before Lee said: "stop being boring, let's have a drink," the court heard.

The trial which is set to conclude on Thursday continues.